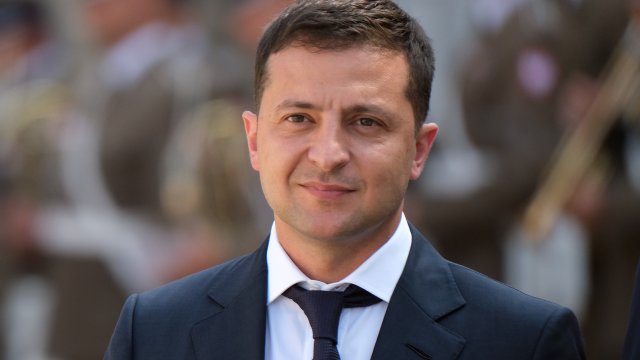 SMS
Zelenksyy Denies Quid Pro Quo But Questions Hold On Aid To Ukraine
By Austin Kim
By Austin Kim
December 2, 2019
In an interview, Ukrainian President Volodymyr Zelensky said he country wouldn't be a piece on a "chess board of big global players."
SHOW TRANSCRIPT

Ukrainian President Volodymyr Zelensky says his country will not be a piece on a "chess board of big global players." This comes as his country is locked in a war with Russia and at the center of the impeachment inquiry in the U.S.

Zelenskyy spoke to Time and three European news outlets, touching on a number of subjects. When it came to the impeachment inquiry, Zelenskyy denied there was a quid pro quo arrangement with President Trump. He questioned why the U.S. initially withheld military aid before eventually releasing it.

Zelenskyy said, "If you're our strategic partner, then you can't go blocking anything for us. I think that's just about fairness. It's not about a quid pro quo. It just goes without saying."

Ukraine's leader reiterated the significance of that U.S. military aid, which it relies on in its fight against Russia. He also played up his own strength to not cave to the global super powers, a statement he's made before.

"Nobody can put pressure on me because I'm the president of an independent Ukraine," Zelenskyy told reporters in September. "There's only one pressure that can pressure me and that is my six-year-old son."

Zelenskyy also said President Trump's claim that Ukraine, as a whole, is corrupt has a broader impact. He said it's a "a signal, for the world, for everyone." He added it could scare away companies and investors from doing business in the country.

The Ukrainian president's focus now turns to upcoming peace talks with Russia — where France and Germany will act as mediators between Zelenskyy and Russian President Vladimir Putin. Those negotiations start Dec. 9 in Paris.