Ukraine's Horse Rescuer: 'This Is My Front Line' 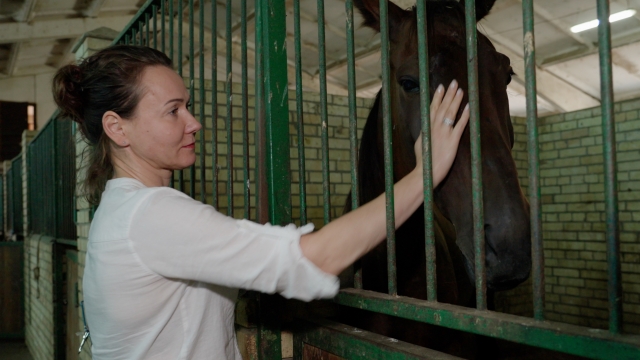 SMS
Ukraine's Horse Rescuer: 'This Is My Front Line'
By Jason Bellini
By Jason Bellini
September 14, 2022
Many animals were displaced and left behind as Russian forces started invading Ukraine. Now, months after the invasion, some horses have been saved.

After months in the middle of a Ukrainian battlefield, several horses crossed to safety Wednesday near the front line in Kharkiv.

They will join other survivors of war in a safe haven in Western Ukraine.

Through more than six months of chaos, Ukraine’s horse owners faced gut-wrenching decisions. Many had no choice but to abandon their animals and hope they’d be rescued.

Taisia Stadnichenko is the head of operations at the Ukrainian Equestrian Federation.

"I know drivers. I know who needs help. I know how much help we can deliver," said Stadnichenko.

That help is still being organized, on a near-daily basis, by Taya Stadnichenko. She's the self-appointed equestrian 911 operator.

"I just get a message. If we send car to Russian area to take the horses, our car will not get out. Never," she said.

This cry for help is coming from a horse owner in Russian-occupied Kherson, caught in the crossfire. There’s no way for her to help them.

But even before this week, before Ukraine’s lighting liberation of the Kharkiv region — she managed to lead daring rescues to get some horses from Russian occupied areas out of harm's way.

TAISIA STADNICHENKO: People were walking with the two horses the whole night and part of the day. And our trailer was hidden into the forest and it was bombing people. Just five kilometers from the front line. And we took those horses.

NEWSY'S JASON BELLINI: Are there horses that are suffering, that are dying right now?

STADNICHENKO: Yes, of course. We have many cases when it's too late. When people are just waiting, waiting and waiting. And then after it's too late, they ask us for help. It’s not like a cat or a dog you just put in the car and take with yourself.

In the Kyiv suburb of Irpin, seized by Russia on the first day of the war, Taya introduces us to Evhen Ramazanov.

He owns stables and the equestrian training ground.

He showed Newsy videos he took on Feb. 24. That day his land became the front line of a war zone. He housed, at the time, 90 horses. Twelve days later, he realized he and his family needed to flee the property, leaving behind the horses.

"It was like the apocalypse in a movie,” he says. "Fifteen horses were killed. Some from explosions with shrapnel, some from a direct hit and some from dehydration, because there was no water." 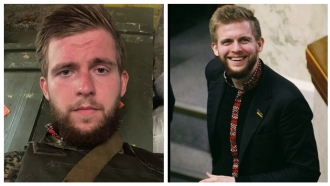 He says the ones that survived miraculously managed to jump over a fence and lead themselves to water.

Ramazanov wanted to introduce us to Rodeo, the old horse he considers a hero.

The horses couldn’t stay in the field near the water. Shells were falling all around them.

"It was a miracle. This Rodeo gathered the entire herd and brought them home, he says. "The horse understood that it was too dangerous to stay there."

BELLINI: What did you see when you came back?

EVHEN RAMAZANOV: I don’t know if I can talk about that. But one of the survivors just gave birth. She stayed here all her pregnancy under such horrendous conditions, under the bombing.

Russian troops commandeered the stables of other horse owners.

Oliiynichenko Oleksandra said the Russians stole everything in her barn and 13 of the horses she boarded there died.

What she hasn’t lost is her love of horses. She leads many of the rescue operations.

The biggest challenge ahead is winter, and feeding and housing 5,000 rescued horses, which costs around $200 per month, per horse. That money that comes from donations.

BELLINI: From around the world?

STADNICHENKO: From all around the world, from United States, Japan and from everywhere. U.S. equestrian sent veterinary supply donation for about $100,000. It will help about 5000 horses for a few months.

Before the war, Stadnichenko published photo books of horses. Ironically and no longer, Russia was her primary market. Now her life is devoted to saving the animals she has loved since she was a child.

STADNICHENKO: Everybody has their own front line. There are people that are caring about people and caring about children. But I care about horses, so I'm focused at them. This is my front line.