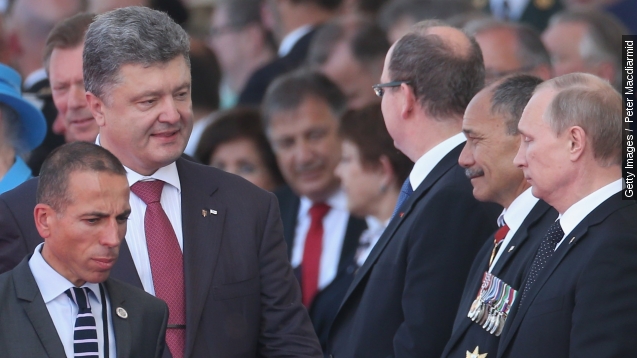 SMS
Ukraine's Government Doesn't Want This Handshake Publicized
By Sebastian Martinez
By Sebastian Martinez
October 19, 2015
A handshake between Russian President Vladimir Putin and his Ukrainian counterpart Petro Poroshenko is something the latter wants to keep under wraps.
SHOW TRANSCRIPT

This is a pretty controversial handshake. (Video via LifeNews)

And that's because of the participants: Russian President Vladimir Putin and his Ukrainian counterpart Petro Poroshenko.

The two have been engaged in a kind of proxy war, with Ukrainian troops fighting Russian-backed separatists in Ukraine's east. (Video via RT)

Which might be why Ukrainian TV station 112 Ukraina is alleging Poroshenko's administration asked it not to air the handshake. (Video via 112 Ukraina)

Producer Viktor Zubritsky said the station was beset by a "sudden storm of calls" from officials saying the handshake was "inadmissable."

But the reason it happened in the first place is that the countries are trying to improve diplomatic relations. (Video via Al Jazeera)

The presidents were in Paris for a meeting of the "Normandy Four," made up of Poroshenko, German Chancellor Angela Merkel, French President Francois Hollande and, of course, Putin.

They were assessing progress on February's Minsk agreement in Belarus, which led to a cease-fire that started in September. (Video via Fox News)

And also happened to be the last time they publicly shook hands. (Video via Deutsche Welle)

Hollande said after the meetings, it'll still take time for the latest peace agreement to be fully realized. (Video via France 24)