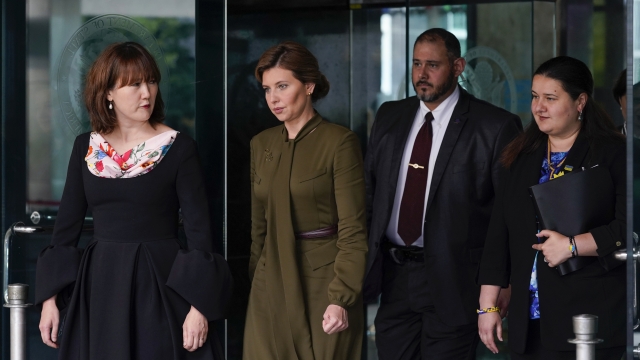 The provocative words come as the civilian death toll from Russia’s invasion continues to grow in her absence.

Olena Zelenska made an emotional appeal to the U.S. Congress, punctuated by pictures of children killed or maimed by Russian attacks.

She asked for more military support for Ukraine and to someday make possible what now is not.

"We want everybody and every mother to be able to tell their child, 'go to sleep peacefully, there will be no more air strikes, no more missile strikes.' Is this so much to wish for?," Zelenska said.

Her message comes as the situation in Ukraine grows more dire by the day.

Nearly two million Ukrainian refugees have been sent to Russia, according to a tally by officials from both countries.

An Associated Press investigation found many of those refugees are given a "poisoned choice:" live in Russia, or die in Ukraine.

Ukraine sees them as forced moves to enemy territory — a war crime.

Viktoria Kovalevska is a Ukrainian refugee.

"There were people with weapons. Five of them surrounded me and said: 'you don't get to choose; you’ll go where you are loaded.'" Kovalevska said.

The U.S. State Department is calling on Russian President Vladimir Putin to put a stop to these so-called "filtration" operations.

The agency's appeal describes children separated from their parents, passports confiscated and civilians forced to undergo invasive searches and interrogations.

Marina Nosylenko is another Ukrainian refugee.

"We try to keep everything positive, to not discuss all of this, to not talk about it. As if everything is fine, as if we just changed our place of residence," Nosylenko said.

And U.S. officials believe this is just the beginning.

"We're seeing ample evidence and intelligence and in the public domain that Russia intends to try to annex additional Ukrainian territory. Russia is beginning to roll out a version of what you could call an annexation playbook," said John Kirby, spokesperson for the National Security Council.