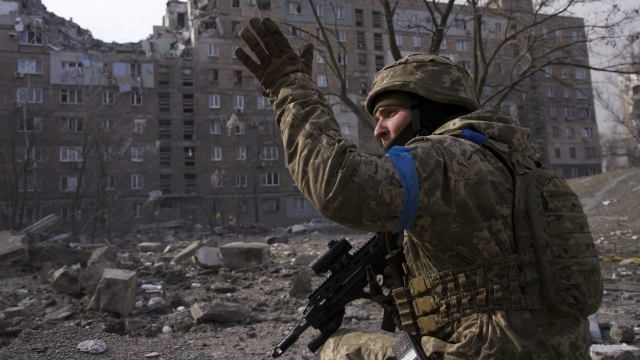 SMS
Ukraine Rejects Russian Demand For Surrender In Key City Of Mariupol
By Associated Press
By Associated Press
March 21, 2022
Ukrainian officials have rejected a Russian proposal that their troops lay down their arms in the strategic southern port city.

Ukrainian officials defiantly rejected a Russian demand that their forces in Mariupol lay down arms and raise white flags Monday in exchange for safe passage out of the besieged strategic port city.

Even as Russia intensified its attempt to bombard Mariupol into surrender, its offensive in other parts of Ukraine has floundered. Western governments and analysts see the broader conflict grinding into a war of attrition, with Russia continuing to barrage cities. 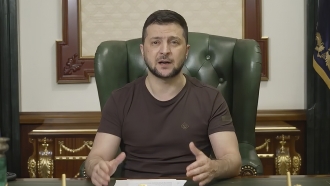 In the capital Kyiv, Russian shelling devastated a shopping center near the city center, killing at least eight people and leaving a sea of rubble amid scarred high-rises. Ukrainian authorities also said Russia shelled a chemical plant in northeastern Ukraine, causing an ammonia leak, and hit a military training base in the west with cruise missiles.

The encircled southern city of Mariupol on the Sea of Azov has seen some of the worst horrors of the war, under Russian pounding for more than three weeks. Strikes hit an art school sheltering some 400 people only hours before Russia's offer to open two corridors out of the city in return for the capitulation of its defenders, according to Ukrainian officials. Ukrainian officials rejected the Russian proposal for safe passage out of Mariupol.

“There can be no talk of any surrender, laying down of arms," Ukrainian Deputy Prime Minister Irina Vereshchuk told the news outlet Ukrainian Pravda. "We have already informed the Russian side about this.”

Multiple attempts to evacuate residents from Mariupol and other Ukrainian cities have failed or only partly succeeded, with bombardments continuing as civilians tried to flee. Mariupol officials said at least 2,300 people have died in the siege, with some buried in mass graves. 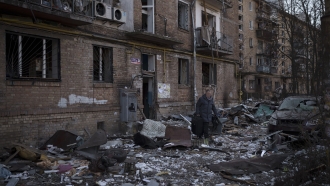 Russia-Ukraine: Key Things To Know About The War (March 19)

Ahead of the rejected surrender offer, a Russian airstrike hit the school where some 400 civilians were taking shelter and it was not clear how many casualties there were, Ukraine’s President Volodymyr Zelenskyy said in a video address early Monday.

“They are under the rubble, and we don’t know how many of them have survived,” he said. He said Ukraine would “shoot down the pilot who dropped that bomb.”

The strike on the art school was the second time in less than a week that officials reported an attack on a public building where Mariupol residents had taken shelter. On Wednesday, a bomb hit a theater where more than 1,000 people were believed to be sheltering. At least 130 people were reported rescued on Friday, but there has been no update since then.

City officials and aid groups say food, water and electricity have run low in Mariupol and fighting has kept out humanitarian convoys. Communications are severed.

The fall of Mariupol would allow Russian forces in southern and eastern Ukraine to unite. But Western military analysts say that even if the city is taken, the troops battling a block at a time for control there may be too depleted to help secure Russian breakthroughs on other fronts.

More than three weeks into the invasion, the two sides now seem to be trying to wear each other down, experts say, with bogged-down Russian forces launching long-range missiles at cities and military bases as Ukrainian forces carry out hit-and-run attacks and seek to sever Russian supply lines.

Talks between Russia and Ukraine have continued but failed to bridge the chasm between the two sides, with Russia demanding Ukraine disarm and Ukraine saying Russian forces must withdraw from the whole country.

President Biden was expected to talk later Monday with the leaders of France, Germany, Italy and Britain to discuss the war, before heading later in the week to Brussels and then Poland for in-person talks.