Ukraine Regains Some Territory From Russians As Attacks Continue 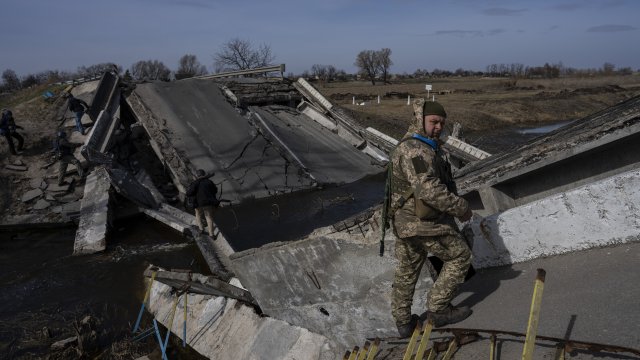 SMS
Ukraine Regains Some Territory From Russians As Attacks Continue
By Sasha Ingber
By Sasha Ingber
March 28, 2022
A Ukrainian mayor of one town said they had retaken it. While U.S. officials couldn't confirm it, they said a different town had been retaken.

One of the many things the Ukraine-Russia conflict has shown the world is the incredible heart and resolve of the Ukrainian people, and it seems there's been an increase in Ukrainian defense forces' confidence and in their counter offenses.

On Monday, the mayor of a Kyiv suburb called Irpin said that the country had retaken that town — a gateway to Kyiv that saw heavy fighting.

But at the same time, U.S. officials are saying they can't confirm the retaking of Irpin. They say, however, that the Ukrainians were able to retake another area in the northeast called Trostyanets.

These attacks by the Russian forces will certainly continue, but the Russian forces have largely been stalled, not just in Kyiv, but in other major cities like Kharkiv. The Pentagon is saying that the Russians are focusing their energy on trying to seize the eastern part of the country — the Donbas.

At the same time, a Ukrainian military officer said over the weekend that they believe Russia is trying to partition the country, much the way North Korea and South Korea is.

"We won't sit down at the table at all if all we talk about is demilitarization or ... For me, these are absolutely incomprehensible things," Ukrainian President Volodymyr Zelenskyy said.

There has been some movement when it comes to negotiations. Zelenskyy is willing to give up membership to NATO for neutrality, and on the Russian side, according to reporting in the Financial Times, they are willing to give up the insistence that Ukraine demilitarize.

But a shadow has been cast here.

Newsy has confirmed three peace negotiators — two Ukrainian negotiators and one Russian oligarch, Roman Abramovich — appear to have had symptoms suspected of being poisonings after an early March peace negotiation in Belarus.

Zelenskyy has said that Abramovich was part of a subgroup involved in humanitarian efforts. It's unclear exactly what the nature of his involvement was, but Newsy is told Abramovich is concerned because the suspected poisoning could have been the work of his own government.

The peace negotiators are not discussing this right now, but there could very well be concern that this could escalate the negotiations coming up.

At the same time, British intelligence is now saying that a private military company tied to Putin has deployed its troops to the east, so this could escalate more in the days ahead regardless of the peace negotiations.