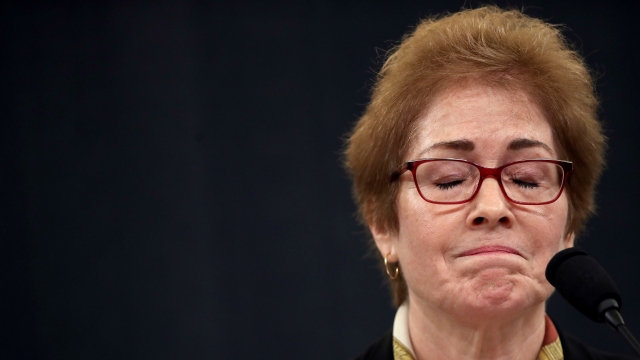 Ukraine is opening an investigation into the possible illegal surveillance of former U.S. Ambassador to Ukraine, Marie Yovanovitch.

The investigation follows the release of photos, text messages and notes handed over to the House Intelligence Committee by Lev Parnas.

Parnas's text messages had dozens of references to Yovanovitch and conversations centering on efforts to remove her from her post. That included texts by Connecticut congressional candidate Robert F. Hyde, who implied he had Yovanovitch under physical surveillance in Kyiv.

The Ministry of Internal Affairs of Ukraine said Thursday these text messages "contain a possible violation of the law of Ukraine and the Vienna Convention on Diplomatic Relations, which protects the rights of a diplomat on the territory of the foreign country."

Ukraine says it will look into Hyde's comments and see if there really was surveillance on Yovanovitch, or if they were "bravado" and "fake information."

Yovanovitch's attorney says, "Needless to say, the notion that American citizens and others were monitoring Ambassador Yovanovitch's movements for unknown purposes is disturbing." He adds, "We trust that the appropriate authorities will conduct an investigation to determine what happened."

Ukraine says it wants to work with U.S. authorities in this investigation.