Ukraine Forest Is Site Of Another Mass Grave Exhumation 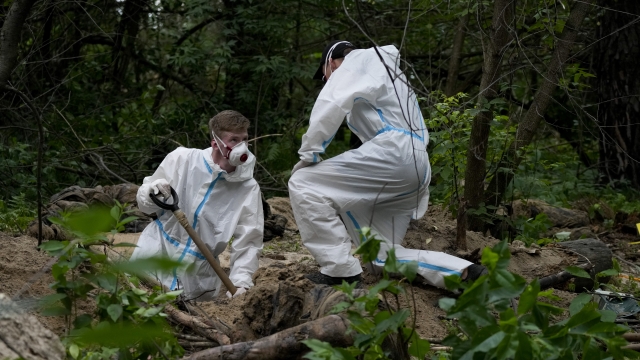 The lush green beauty of a pine forest with singing birds contrasted with the violent deaths of newly discovered victims of Russia's war in Ukraine, as workers exhumed bodies from another mass grave near the town of Bucha on Kyiv's outskirts.

The hands of several victims were tied behind their backs. The gruesome work of digging up the remains coincided with the Ukrainian police chief's report that authorities have opened criminal investigations into the killings of more than 12,000 people since Russia’ invaded Ukraine on Feb. 24.

Workers wearing white hazmat suits and masks used shovels to exhume bodies from the soil of the forest, marking each section with small yellow numbered signs on the ground. The bodies, covered in cloth and dirt, attracted flies.

“Shots to the knees tell us that people were tortured,” Andriy Nebytov, head of the Kyiv regional police, said at the scene. “The hands tied behind the back with tape say that people had been held (hostage) for a long time and (enemy forces) tried to get any information from them.” 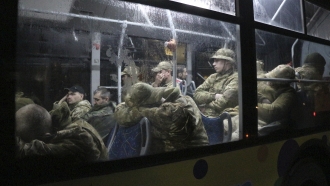 Since the withdrawal of Russian troops from the region at the end of March, authorities say they have uncovered the bodies of 1,316 people, many in mass graves in the forest and elsewhere.

The horrors of Bucha shocked the world after Russian troops left. The mass grave that reporters saw Monday was just behind a trench dug out for a military vehicle. The bodies of seven civilians were retrieved. Two of the bodies were found with their hands tied and gunshot wounds to the knees and head, Nebytov said.

National police chief Igor Klimenko told the Interfax-Ukraine news agency on Monday that criminal investigations into the deaths of more than 12,000 Ukrainians included some found in mass graves. He said the mass killings also were done by snipers firing from tanks and armored personnel carriers. Bodies were found lying on streets and homes, as well as in mass graves.

He didn't specify how many of the more than 12,000 were civilians and how many were military.