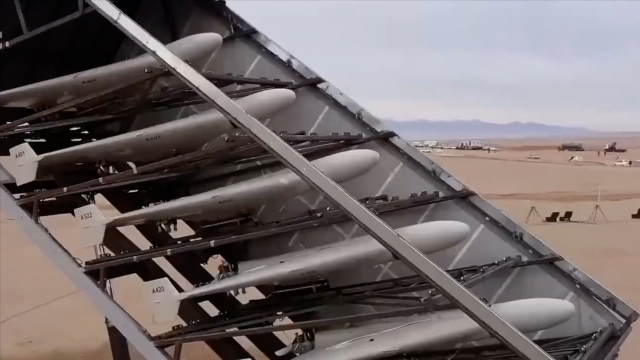 Ukrainians refer to the newest Russian weapon on the battlefield — and the sound they make — as "flying lawnmowers of death."

This video captures the deadly addition to Putin's arsenal of long-range weaponry: the Iranian Shahed-136 kamikaze drone, used by Russia as part of the deadly attack on civilian targets across Ukraine.

Ukrainian officials say in Monday's attack Russia launched more than a dozen kamikaze drones in a matter of hours. Ukraine was only able to shoot down half of them. They've been spotted in the skies over Ukrainian cities, including over Odesa, although Iran denies it and Russia won't confirm the use of the deadly drones.

"We know that U.S. intelligence has estimated a transfer of several hundred of these drones to Russia," said Samuel Bendett, an adviser at the Center for New American Security. "Because these drones can fly at well over 200 to 300 kilometers, they were basically used as a cheap weapon, a cheap terror weapon to strike Ukrainian infrastructure across the country."

They're cheaper for Russia than cruise missiles, each of which cost millions of dollars. Putin's military is using the drones primarily to terrorize civilians far from the front lines.

Russian President Putin will attend a ceremony Friday when the regions of Luhansk, Donetsk, Kherson and Zaporishshia will officially join Russia.

"If they can sneak past the air defenses or electronic warfare pockets, they can basically strike with impunity. And this is a message sent to the defending side that they are not safe because these drones can penetrate the airspace, they can penetrate defenses and strike at will," said Bendett. "They can strike civilian targets, they can strike infrastructure targets, they can target Ukrainian warehouses, command and control, logistics and communications and cause the same amount of damage that was caused in Russia's own rear in their own region when the Ukrainians launched multiple strikes to affect Russian logistics."

Though Shahed-class drones aren't as accurate and carry a fraction of the explosive power of a missile, they still pack a punch — as seen in an attack last month on a municipal building in Odesa.

Comparatively low-tech, and low and slow flying, these drones are vulnerable to small arms fire and Ukrainian aerial defense systems. Ukraine's military has released images showing the remnants of drones shot out of the sky. The problem for Ukraine is that the Shaheds usually attack in swarms.

"This is their main tactic to overwhelm so that at least one or two can sneak past and strike the target," said Bendett.

For the first part of the war, Ukraine's Turkish Bayrkatar drones dominated the battlefield, even inspiring this patriotic song.

But then came the more menacing Iranian drones. They're not going to be a game changer, but they can cause significant pain and suffering for the defending side.