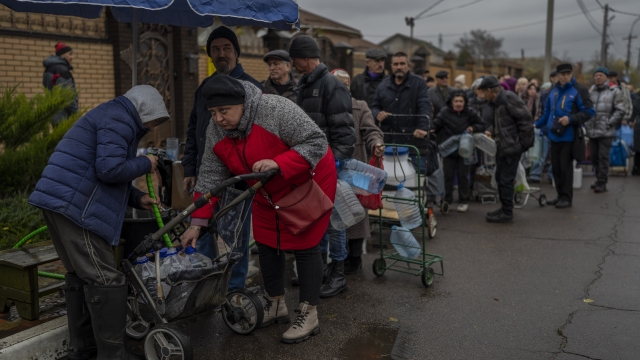 Ukrainian authorities have begun evacuating civilians from recently liberated sections of the Kherson and Mykolaiv regions, fearing that a lack of heat, power and water due to Russian shelling will make living conditions too difficult this winter. The World Health Organization concurred, warning that millions face a “life-threatening” winter in Ukraine.

Authorities urged residents of the two southern regions, which Russian forces have been shelling for months, to move to safer areas in the central and and western parts of the country. Ukrainian Deputy Prime Minister Iryna Vereshchuk said Monday that the government will provide transportation, accommodations and medical care for them, with priority for women with children, the sick and elderly.

Vereshchuk last month asked citizens now living abroad not to return to Ukraine for the winter to conserve power. Other officials have suggested that residents in Kyiv or elsewhere who have the resources to leave Ukraine for a few months should do so, to save power for hospitals and other key facilities.

The WHO delivered a chilling warning Monday about the energy crisis' human impact on Ukraine.

“This winter will be life-threatening for millions of people in Ukraine,” said the WHO’s regional director for Europe, Dr. Hans Henri P. Kluge. “Attacks on health and energy infrastructure mean hundreds of hospitals and healthcare facilities are no longer fully operational, lacking fuel, water and electricity.”

He warned of health risks such as respiratory and cardiovascular problems from people trying to warm themselves by burning charcoal or wood and using diesel generators and electric heaters.

The evacuations are taking place more than a week after Ukraine recaptured the city of Kherson, on the western bank of the Dnieper River, and surrounding areas in a major battlefield gain. Since then, heading into the winter, residents and authorities alike are realizing how much power and other infrastructure the Russians damaged or destroyed before retreating.

Ukraine is known for its brutal winter weather, and snow has already covered Kyiv, the capital, and other parts of the country.

Russian forces are fortifying their defense lines along Dnieper River's eastern bank, fearing that Ukrainian forces will push deeper into the region. In the weeks before Ukraine's successful counteroffensive, Russian-installed authorities relocated tens of thousands of Kherson city residents to Russian-held areas.

Russia has been pounding Ukraine’s power grid and other infrastructure from the air for weeks, causing widespread blackouts and leaving millions of Ukrainians without electricity, heat and water.

Zelenskyy on Monday repeated his calls for NATO nations and other allies to recognize Russia as a terrorist state, saying its shelling of energy facilities was tantamount “to the use of a weapon of mass destruction.” Zelenskyy also again urged stricter sanctions against Russia and appealed for more air defense aid.

“The terrorist state needs to see that they do not stand a chance,” he told NATO’s 68th Parliamentary Assembly meeting in Madrid in a video address, after which he said the body approved the terrorist designation.