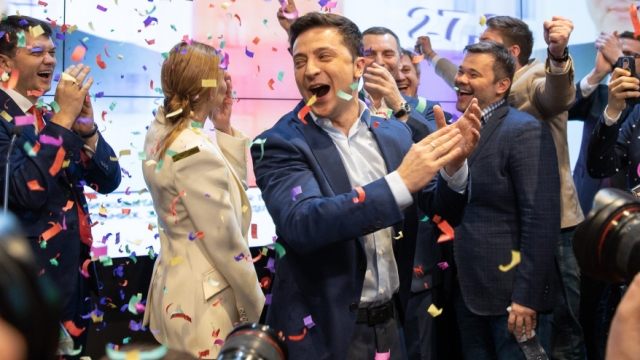 Ukraine has elected a new president.

Comedian Volodymyr Zelenskiy won Ukraine's runoff election by a landslide. With nearly all of the ballots counted, he garnered 73 percent of the vote. His opponent — incumbent President Petro Poroshenko — conceded defeat Sunday.

Zelenskiy is new to politics. He recently starred in a popular comedy TV show where he played a history teacher who is elected president.

Zelenskiy used his lack of political experience to help bolster his campaign, but he hasn't really outlined any concrete policies. According to one Ukrainian news outlet, members of Zelenskiy's team said the first thing that must be done is an "audit of reform." A spokesperson specifically mentioned health care reform, saying the current system needs to be reassessed and adjusted.

And NBC News described Zelenskiy as "less empathetic" than current President Poroshenko regarding Ukraine's attempts to join the European Union and NATO.

Poroshenko has voiced his concern that Zelenskiy is too inexperienced to deal with Ukraine-Russia relations.

Things have been pretty tense between the two countries for years. Last November, Russia seized three Ukrainian naval vessels and their crews off the coast of the Crimean Peninsula. In response, Poroshenko imposed martial law to help protect the country.

Zelenskiy has said he's willing to sit down with Russian President Vladimir Putin, but he isn't willing to give up Ukraine's "territories and people."