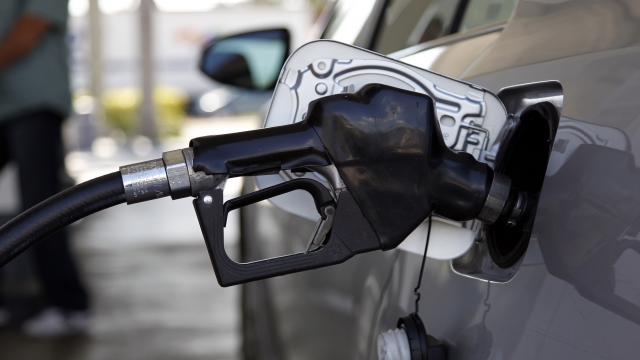 SMS
Pain At The Pump Here To Stay As Ukraine Crisis Impacts Gas Prices
By John Mone
By John Mone
February 22, 2022
The tension may be causing higher gas prices at the pump but it's also good for oil businesses.

The pain at the pump may be sustained for some time as world oil demand goes up and uncertainty abounds over Russia's aggressive moves into Ukraine.

"Right now what's in the headlines and driving prices is the Ukrainian situation and the possibility that on the one hand, western allies might take some steps regarding sanctions that would reduce Russian oil exports, coming at a time when the market is already quite tight," said Michael Lynch, with the Energy Policy Research Foundation.

A mixed bag of sorts — it means higher gas prices at the pump but also good news for oil businesses. At the beginning of the pandemic, west Texas crude prices cratered.

As the economy recovered, prices steadily rose and with Russia looming over Ukraine, the prices are heating up even more, approaching $100 a barrel and maybe even higher.

For fracking and drilling operations like Tall City Exploration in the west Texas Permian Basin and others in southeastern New Mexico, it's now worth the cost to explore for oil again.

"We started drilling again as prices had recovered. I think they were back in the sixties or so — something like that when we started — but anyway, it was economic again to drill," said Tall City Exploration CEO Mike Oestmann.

And rig count data shows drilling is up. Oil and gas services company Baker Hughes says there are 645 active oil rigs in the U.S.

That's 248 more than this time than last year. But costs to drill are also on the rise.

"We're now running two rigs, so we've doubled our rig count and we plan to keep that number of rigs going for the remainder of this year," Oestmann said. "Cost, however, are going back up. Steel has gone through the roof. Fracking costs are going up. We had some difficulties with sand — those have pretty much been resolved but as commodity price increases, so does the cost to drill."

As drillers rush to cash in on the higher prices, U.S. government data shows that frackers in Texas could churn out close to 110,000 barrels a day by March.