Ukraine Creates A New Civilian Reserve In Its Armed Forces 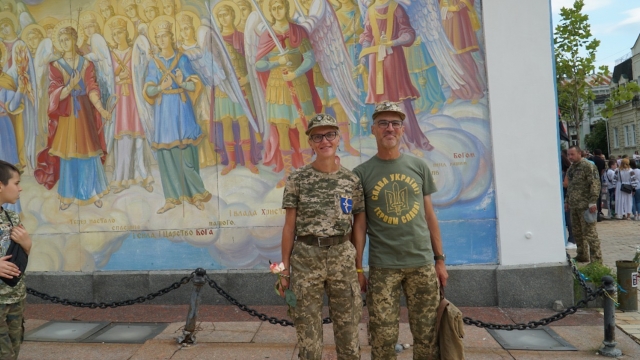 This married couple teaches politics and sociology at a university in Kyiv and now they're part of Ukraine's Territorial Defense Force, a new civilian reserve which officially began January 1.

"I decided to join our Territorial Defense Forces for my wife and for my children to wear our national dress, to sing our national songs, to study our national culture, to speak our national language," Poltorakov says. "I don't want to live under a dictatorship like Putin regime."

Every Saturday, they train for half a day — often using replicas of weapons. The government could contact them with 24-hours' notice to help protect Kyiv if Russian tanks roll into Ukraine this winter.

The Territorial Defense Force is a branch of the country's Armed Forces with 25 brigades to protect 25 "oblasts," or regions. It's structured so that Ukrainians defend their own areas, according to military analyst Hanna Shelest.

Hanna Shelest is the director of security programs at the Foreign Policy Council "Ukrainian Prism."

"It's easier for people to protect something that is theirs, where they consider themselves local, because sometimes even the propaganda Russian propaganda use this idea like why the guys from western Ukraine should protect the Eastern Territories, for example," she said. "It brings the feeling of ownership towards this process."

Shelest says the idea began years ago, after Russian troops seized the Crimean peninsula. Civilians took up arms then, but now there is a more structured process. Volunteers are learning how to use firearms and how to protect their regions’ nuclear plants, airports, seaports, and other critical infrastructure.

"We learn from the examples of Crimea annexation in 2014, when Russian forces without insignia were just coming and closing the perimeter and preventing Ukrainian forces or civilians to leave the territory of certain enterprises."

Ukraine's Defense Ministry expects to enlist about 130,000 reservists, augmenting 10,000 servicemen. And women are signing up too.

"About 10% of my battalion are women," Shchyho said.

It comes as U.S. intelligence assesses that a large-scale invasion by Russia could cause up to 50,000 civilian deaths and send another 5 million people fleeing.

[ALTERNATE LINE] It comes after the Washington Post first reported a U.S. intelligence assessment that a large-scale invasion by Russia could cause up to 50,000 civilian deaths and send another 5 million people fleeing.