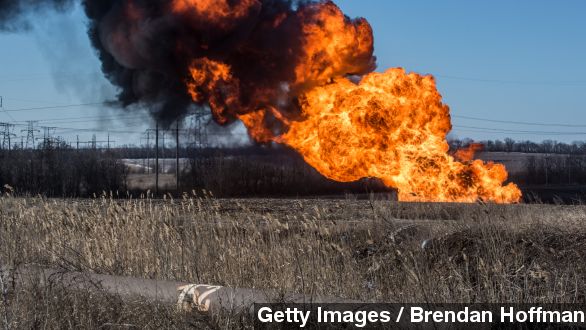 It seems this is what that cease-fire looks like in Debaltseve. (Video via Euronews)

On Tuesday, Russian-backed separatists claimed they captured the city, insisting Debaltseve was never part of the truce to begin with. (Video via Radio Free Europe / Radio Liberty)

And on Wednesday, government forces began pulling out of the city.

Debaltseve has been the site of continued fighting for the past month. It sits on a strategic railway junction. Capturing it would give the rebels easy access to other main rebel-held cities of Luhansk and Donetsk.

On Monday, a deadline for both sides to remove heavy weapons from the front lines came and went, with each side insisting the other had to make the first move. Neither did. (Video via YouTube / Novorossia NEWS)

Of course the fact that rebels even have heavy weaponry to begin with is a big sticking point among the world leaders who negotiated the truce.

Ukraine and the West accuse Russia of arming the rebels. Moscow still denies any involvement, despite overwhelming evidence to the contrary. (Video via YouTube / National Separatist)

Meanwhile, the Ukrainian troops defending the city are in desperate need of supplies.

The Guardian reports they're essentially trapped inside the city and running out of ammunition.

This comes as the Obama administration debates supplying the Ukrainian soldiers with arms, a decision that could hinge on whether this latest attempt at a cease-fire holds. (Video via The White House)