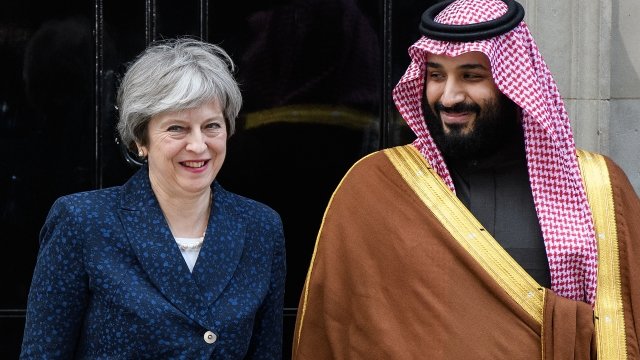 SMS
UK To Sell 48 Jets To Saudi Arabia Despite Role In Yemen's Civil War
By Jake Jones
By Jake Jones
March 9, 2018
Saudi Arabia is backing the deposed Sunni government in Yemen in a civil war that has claimed thousands of lives.
SHOW TRANSCRIPT

The United Kingdom is inching closer toward a deal to sell new fighter jets to Saudi Arabia, despite the country's involvement in Yemen's civil war.

After a three-day trip to the U.K. by Crown Prince Mohammed bin Salman, the two nations signed a memorandum of intent, a preliminary agreement for the sale of 48 Typhoon jets — a move criticized by human rights advocates.

Both nations have visions of a future trade relationship, with the U.K. focused on post-Brexit ventures and Saudi Arabia moving to diversify from its economic reliance on oil.

What didn't seem to be a major talking point was Saudi involvement in Yemen's civil war, a three-year conflict between the deposed Sunni government and Shiite Houthi rebels. Saudi Arabia backs the deposed Sunni president, while Iran supports the rebels.

The conflict has pushed Yemen — already the poorest country in the Middle East — to the brink of famine. Outbreaks of diseases like cholera have claimed even more lives.

And the U.K. isn't the only country selling military equipment to the Sunni kingdom. President Donald Trump signed off on a deal to sell Saudi Arabia more than $150 billion worth of jets, tanks and anti-missile systems when he visited Riyadh in May of last year.