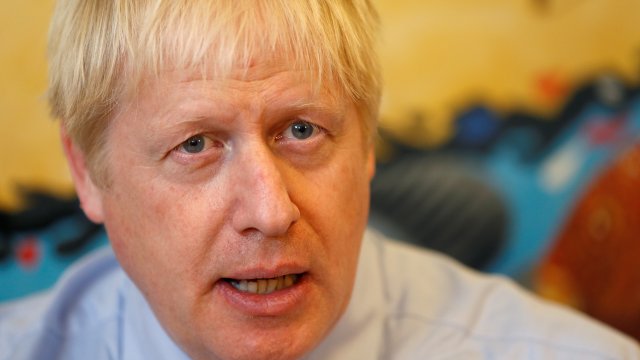 SMS
UK Prime Minister Boris Johnson Asks EU To Scrap 'Backstop' Agreement
By Briana Koeneman
By Briana Koeneman
August 20, 2019
Johnson said the provision in the Brexit agreement needs to go because it's "unviable" and "inconsistent with the sovereignty of the U.K. as a state."
SHOW TRANSCRIPT

U.K. Prime Minister Boris Johnson told the European Union a Brexit deal could still get the thumbs up from Parliament — if the EU agrees to get rid of the so-called "backstop" agreement.

In a letter addressed to European Council President Donald Tusk, Johnson said the backstop needs to go because it's "unviable," "anti-democratic" and "inconsistent with the sovereignty of the U.K. as a state."

He promised his government will work with "energy and determination" to reach an agreement without the backstop.

But Tusk quickly dismissed Johnson's call to scrap the provision. He said in a tweet the backstop is an insurance policy to prevent a hard border "unless and until an alternative is found." And he criticized opponents of the plan for not "proposing realistic alternatives."

The backstop agreement was negotiated by former Prime Minister Theresa May with the EU. It's meant to prevent a hard border between Northern Ireland — which is part of the U.K. — and the Republic of Ireland. The backstop has already been voted down three times by British lawmakers. But the EU has insisted it be included in any new divorce deal.

Still, the bloc doesn't have all the leverage. The EU prefers to see an orderly Brexit, but the U.K. could leave without a deal and throw more uncertainty into the U.K.-EU relationship.

The U.K. is currently scheduled to leave the EU on Oct. 31.