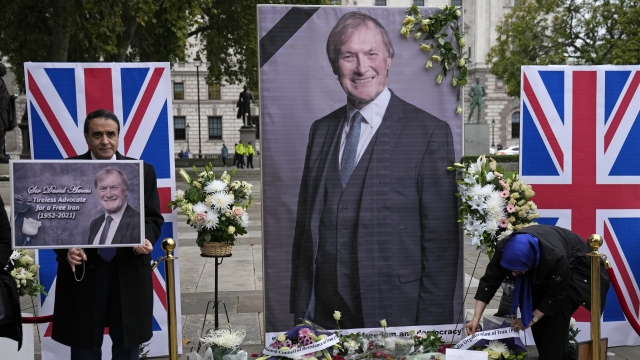 British police charged a 25-year-old man Thursday with the murder of a Conservative lawmaker, alleging that the killing was an act of terrorism by a supporter of the ISIS.

Prosecutors said Ali Harbi Ali, a man from London with Somali heritage, had "religious and ideological motivations" when he attacked David Amess last week in the town of Leigh-on-Sea. Prosecutors allege Ali targeted Amess because the lawmaker had voted for air strikes on Syria.

The slaying took place as Amess, who was 69, attended a routine meeting with his constituents. The slaying shook a nation accustomed to having face-to-face contact with its leaders, heightened concerns about extremism and rattled British politicians, who say they face increasing levels of vitriol and abuse as they perform their jobs.

At a briefing hearing at London's Westminster Magistrates' Court on Thursday, prosecutor James Cable said Ali began planning to kill a lawmaker two years ago, and initially focused on two other politicians before choosing Amess.

Ali was not asked to enter a plea at the preliminary hearing, which lasted less than 15 minutes. He smiled at his legal team as he entered the court and spoke only to confirm his name, age, and address. He was ordered detained until the next hearing.

Nick Price of the Crown Prosecution Service said the murder "has a terrorist connection, namely that it had both religious and ideological motivations."

Matt Jukes, the Metropolitan Police Assistant Commissioner for Specialist Operations, said "no other arrests have been made and at this time we are not seeking anybody else in relation to this incident."

The death of Amess, who had served in Parliament for almost 40 years and was knighted by Queen Elizabeth II in 2015, escalated concerns about security among Britain's politicians, who pride themselves on being accessible to their constituents.

The slaying came five years after Labour Party lawmaker Jo Cox was shot and stabbed to death by a far-right extremist. Cox was the first British lawmaker to be killed since a peace accord ended large-scale Northern Ireland violence almost 30 years earlier.

British politicians are protected by armed police when they are in Parliament but generally are not given such protection in their home districts.

Home Secretary Priti Patel told the House of Commons on Wednesday that intelligence officers had upgraded the threat level for politicians from "moderate" to "substantial," though she said there was no "specific or imminent threat."

A special session of the House of Commons on Monday resounded with appeals to force social media giants to do more to prevent the spread of online hate that has poisoned political discourse.

Amess was a social conservative who opposed abortion, campaigned for animal rights and strongly supported Britain's exit from the European Union. He was well liked even by his political opponents for his civility, good humor and commitment to his constituents in the seaside constituency of Southend West, 40 miles east of London.

Prime Minister Boris Johnson said he hoped Amess' loved ones would "get the justice they deserve as fast as possible."

"What we must not do is be intimidated by this appalling murder into changing the way we conduct our parliamentary business or the way we work in our constituencies," he said. "Which I think is the last thing that David Amess would've wanted."