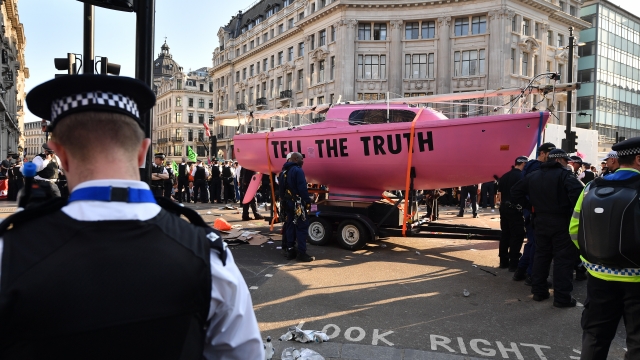 U.K. police have arrested more than 1,000 climate change protesters over the last week.

London PD said Monday that 1,065 people had been arrested in connection with the protests so far. Fifty-three have been charged for various offenses, including obstructing a highway and obstructing police.

The protests are organized by Extinction Rebellion, "an international apolitical network" that's trying "to persuade governments to act on the Climate and Ecological Emergency." The group is asking the British government to "tell the truth" by declaring climate change an emergency; to get the U.K. to net-zero greenhouse gas emissions by 2025; and to "create and be led by the decisions of a Citizens' Assembly on climate and ecological justice."

Protesters have targeted popular London sites such as Oxford Circus, Waterloo Bridge and Parliament Square. On Monday, around 100 people lay down in protest under a blue whale skeleton at the Natural History Museum.

On Sunday, London Mayor Sadiq Khan said the protests were taking "a real toll" on London's police and businesses and that he was "extremely concerned about the impact the protests are having on [the city's] ability to tackle issues like violent crime if they continue any longer."