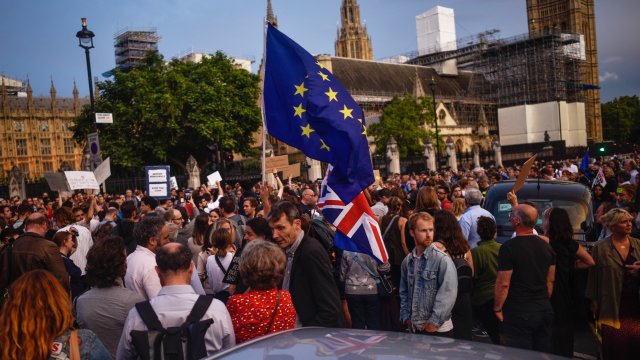 SMS
Boris Johnson Gets Backlash For Suspending Parliament
By Matt Picht
By Matt Picht
August 28, 2019
U.K. Prime Minister Boris Johnson is facing backlash over his plan to temporarily suspend the country's parliament ahead of the Brexit deadline.
SHOW TRANSCRIPT

U.K. Prime Minister Boris Johnson is facing withering criticism over his plan to dismiss the current session of Parliament.

This move, known as prorogation, would severely limit the window lawmakers have to pass legislation preventing Johnson from taking the U.K. out of the European Union without a withdrawal deal. A group of opposition parties recently agreed to pursue legislation that could stop Johnson from triggering a no-deal Brexit.

Opposition leader Jeremy Corbyn accused Johnson of trying to evade Parliamentary scrutiny of his Brexit plans. He's previously pledged to table a no-confidence motion against Johnson; if successful, that motion could force Johnson to call a snap election in order to keep control of the government. 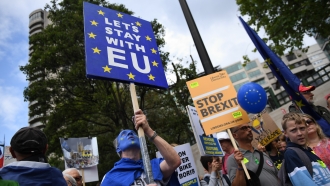 Queen Approves Suspension Of Parliament Ahead Of Brexit Date

There's also some pending legal efforts to stall Johnson's prorogation: petitioners in Scotland are seeking an injunction against Parliament's prorogation until a court hearing to review the move is held on September 6.

Johnson's prorogation starts September 9th, and will last an unprecedented stretch of nearly five weeks. But it's worth noting Parliament usually takes a three-week break around mid-September anyway, in order to hold party conferences. Proroguing Parliament isn't just a suspension, however; it also hits the reset button on pending legislation, clearing the decks of any bills that haven't been passed.

But outside of removing Johnson, there's not much else Parliament can do to block prorogation. The decision on when sessions of Parliament begin or end is technically up to the Queen — and her decisions aren't subject to parliamentary review.