UK Leaders Have Reached An Agreement On Brexit Terms 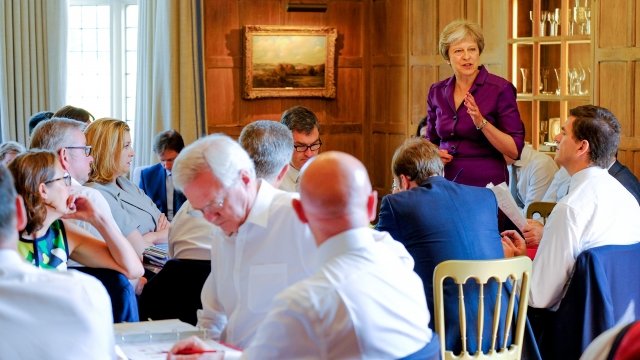 Prime Minister Theresa May and her Cabinet have reached an agreement, but they still have to get the EU on board.

Office of the U.K. Prime Minister

The U.K.'s leaders finally have an agreement on what Brexit should look like.

Prime Minister Theresa May reportedly took a hard line with her Cabinet on Friday and told them to get on board or quit. Her tactic apparently worked, as the U.K. government is now promoting its 12 key principles for Brexit.

The agreement sets a date for the U.K.'s exit: March 29, 2019. And it outlines what the country's relationship with the European Union will look like.

For starters, the U.K. would no longer be under the jurisdiction of the European Court of Justice. The agreement also addresses items including using a "common rulebook" to allow the free trade of goods between the U.K. and the EU, and ending the free movement of citizens.

But this plan isn't a done deal yet. European Union leaders also need to agree to all the conditions. According to the BBC, the U.K. wants to reach a final agreement by October.