UK Government Has No Plans For Second Brexit Referendum 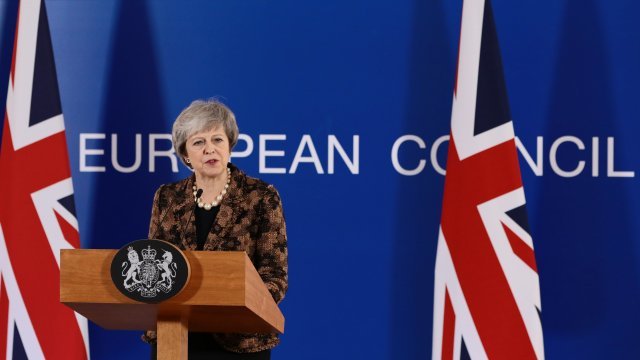 SMS
UK Government Has No Plans For Second Brexit Referendum
By Ethan Weston
By Ethan Weston
December 16, 2018
The U.K.'s deadline to leave the European Union is March 29 — less than four months away.
SHOW TRANSCRIPT

The U.K. government says it's not planning for a second Brexit referendum.

Some members of U.K. Prime Minister Theresa May's party are seeking permission to vote on a second referendum or other ballot measures.

Last week, May delayed a Parliamentary vote on her Brexit deal made with the European Union because it appeared it wouldn't have enough votes to pass.

According to The Guardian, senior government members see no way forward for May's Brexit deal at the moment. The outlet reports when May next meets with her Cabinet on Tuesday, they're expected to urge her to better plan for a possible no-deal Brexit.

Other ministers seem to have more faith in May. One Cabinet minister told Reuters the prime minister was just shoring up support to get Parliament to vote for the deal.

But there's not a lot of time left for Brexit negotiations. The U.K.'s deadline to leave the European Union is March 29 — less than four months away.