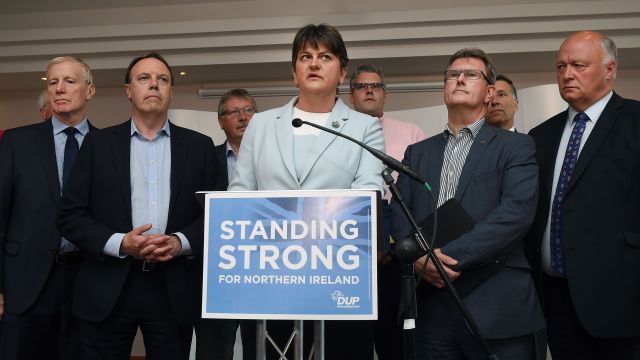 After losing her majority in Parliament, U.K. Prime Minister Theresa May has a new best friend in politics: Northern Ireland's Democratic Unionist Party.

The DUP only represents Northern Ireland, but it runs candidates for seats in the U.K. Parliament. And thanks to a strong showing in the election, the party has just enough seats to give May the majority she needs to govern.

There's plenty of overlap between the DUP and May's Conservative Party. In particular, both parties support the U.K.'s exit from the European Union.

But the DUP's support might come with preconditions about the future of Northern Ireland post-Brexit. The border between Northern Ireland and the Republic of Ireland is sure to be a hot topic.

The DUP also has a history of opposing same-sex marriage and abortion rights. Those values could come up in any power-sharing talks with the Conservatives.

The DUP's opposition, Sinn Fein, might be inclined to support May's progressive opponents if they tried to form a government. But its members traditionally abstain from going to Parliament, so they wouldn't be able to directly help.