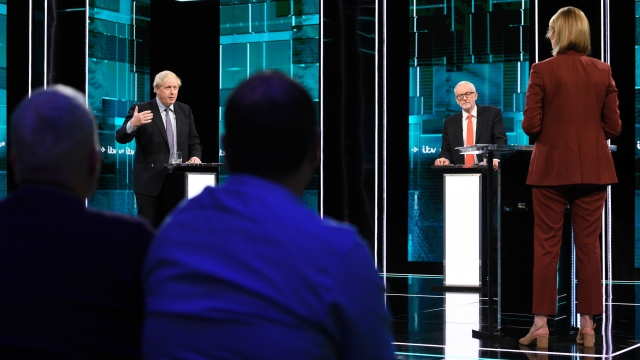 Misinformation plagued the U.K. general election. Domestic and foreign actors alike gamed social media with misleading or false claims. No two elections are the same, but researchers have found similarities between misinformation campaigns across countries. The types of interference we saw in the UK election may show up in the 2020 race in the U.S., as well.

During a televised debate in November 2019, the UK Conservative party dressed up its Twitter account to appear as "FactCheckUK," and claimed it was an independent fact checking organization. The party used the account to present partisan messages as if they were unbiased fact checks. Twitter says this broke its rules, but it didn't do anything to punish the party at the time.

The UK also faced an alleged Russian-backed cyber campaign. Labour party officials showed off documents that suggested Conservatives would sell parts of the U.K's National Health Service to the United States in a trade deal. The documents were originally posted on Reddit, and Reddit security officials later said they suspected the documents could be linked to a Russian disinformation campaign.

Disinformation techniques like these are not unique to the U.K. Researchers at the Oxford Internet Institute found the tools and vectors that spread misinformation there are also likely to be abused in other places, like in the U.S. 2020 race.

Experts at New York University expect political parties, outside groups and foreign nations may all interfere with U.S. election information on social media. In 2018, they spread disinformation on Twitter. In 2020, researchers say they may increasingly turn to tools like Instagram and WhatsApp.

It's also worth noting social media companies don't have much political or economic incentive to be transparent about their misinformation problems. That makes it hard to understand the full scope of the problem. In the week before the U.K. elections, for example, Facebook's ad transparency library deleted 40% of all British political ads on the platform, and Facebook was slow to acknowledge the issue.