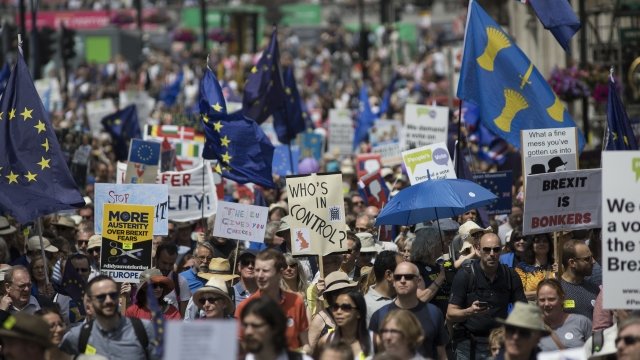 SMS
3,500 Troops Are Ready In Case Britain Can’t Reach A Brexit Deal
By Nnamdi Egwuonwu
By Nnamdi Egwuonwu
December 18, 2018
According to Britain's Defense Secretary, the troops will be ready for action if the government needs them to handle any disruptions.
SHOW TRANSCRIPT

With only weeks left until Britain is set to leave the European Union, the country's cabinet is preparing for the possibility of leaving the international organization without a deal.

Britain Defense Secretary Gavin Williamson says one of those preparations is keeping 3500 soldiers ready to “support any government department on any contingencies they may need.”

It’s not quite clear exactly what contingencies the secretary was referring to, as the military hasn’t been formally asked to deploy troops; but reports say Britain could face a shortage of goods and traffic jams at ports should the country leave the Union without a deal.

AP reports the government has set aside $2.5 billion to cushion the economy against any disruptions, though its still deciding how it’ll allocate the funds.

The United Kingdom is scheduled to leave the EU, with a deal or not, on March 29.