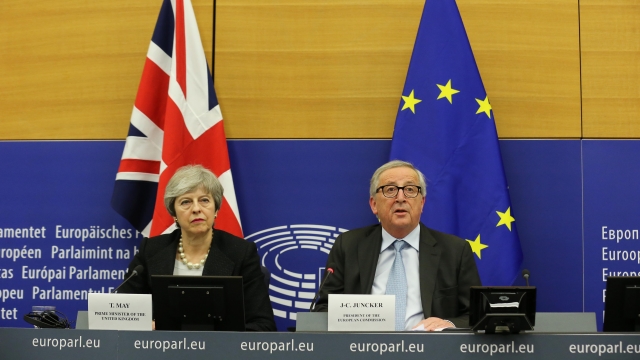 Both parties agreed to a "legally binding joint instrument" to ensure that the EU cannot try to trap the U.K. in the backstop.

British Prime Minister Theresa May and EU Commission President Jean-Claude Juncker have secured "legally binding changes" to the original Brexit agreement ahead of a U.K. Parliament vote on her Brexit deal.

The U.K. is set to leave the EU on March 29, and May has been trying to renegotiate the deal since Britain's Parliament rejected May's Brexit plan in January. A big reason why Parliament rejected May's deal is the issue of the Northern Ireland backstop. It's a policy designed to prevent a hard border with Ireland after Brexit, but critics are concerned it would keep the U.K. tied to the EU.

May and Juncker addressed the "legally binding joint instrument" in Strasbourg Monday. They said both parties agreed to ensure that the EU cannot try to trap the U.K. in the backstop. If the EU were to breach this agreement, the U.K. can suspend the backstop. The legal instrument also "commits the U.K. and the EU to work to replace the backstop with alternative arrangements by December 2020."

Parliament will vote on May's new agreement on Tuesday. If her plan is rejected again, there'll be a vote on leaving the EU without a deal, and then potentially a vote on delaying the departure date. Juncker made it clear that it's "this deal or Brexit might not happen at all."