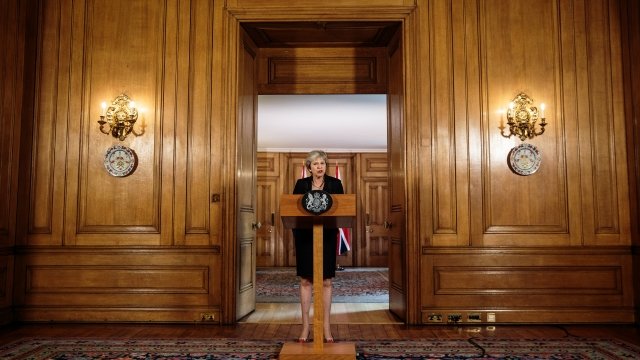 By Sebastián Martínez Valdivia
September 21, 2018
After a summit with European leaders in Salzburg, British Prime Minister Theresa May says the EU hasn't been receptive enough to the UK's proposals.
SHOW TRANSCRIPT

Leaders from the EU and the UK met in Salzburg this week to hash-out a Brexit deal and it went... not great.

"So we are at an impasse." British Prime Minister Theresa May says there are two major sticking points the sides can't agree on: trade and Northern Ireland.

On the first point, she said the EU wants to keep the UK in the European Economic Union and a customs union. May says that would mean the UK would still have to abide by EU rules and immigration policy, something she said would "make a mockery" of the Brexit referendum.

On the second, both sides are trying to avoid a hard border — with security checkpoints and passport control — between Ireland, which is a member of the EU, and Northern Ireland, which is part of the UK. They want a plan in place for the border no matter what happens with the negotiations.

But May says the EU’s plan would essentially cut Northern Ireland off from the rest of the UK, which she says is unacceptable.

EU leader Donald Tusk responded to May's statement Friday, calling the UK's attitude in Salzburg "uncompromising," but emphasizing that the EU will treat the UK's proposals as a step in the right direction.

If the two sides don't reach an agreement before the UK is scheduled to leave the EU in March, economists say there could be major trade disruptions and even food and medicine shortages.