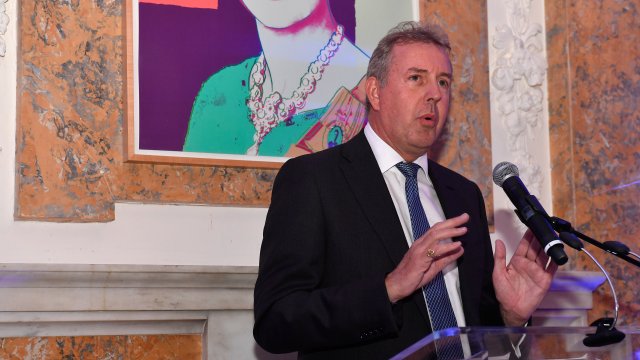 The resignation of U.K. Ambassador to the U.S. Kim Darroch has become a hot-button issue in the race to become the country's next prime minister.

The resignation of U.K. Ambassador Kim Darroch from his post in the U.S. has become a hot-button issue in the ongoing contest to become the country's next prime minister.

Outgoing PM Theresa May threw her support behind Darroch after some of his cables criticizing the Trump administration were leaked to the public. President Trump responded by criticizing May's government on Twitter and threatening to no longer work with the ambassador.

Prior to Darroch's resignation, Foreign Secretary Jeremy Hunt, one of the two candidates to succeed May, said he'd keep the ambassador on if elected prime minister.

But the other candidate in the race, frontrunner Boris Johnson, dodged the question of Darroch's employment status during a TV debate.

Johnson no longer has to worry about that decision, thanks to Darroch's resignation. But the former Foreign Secretary is now facing a wave of political criticism for not sticking up for the ambassador.

Darroch was due to step down in December anyway, but Trump's response to his leaked comments endangered Darroch's ability to effectively do his job. And preserving ties with the White House is a big priority for Johnson: a U.S.-U.K. trade deal is one of his major post-Brexit goals.

But opposition leader Jeremy Corbyn tweeted that Johnson's indecision about Darroch "shows he won’t stand up to Donald Trump, or stand up for Britain."

The leak of Darroch's communications has led to fears other diplomats might start self-censoring their communications to protect their jobs from political blowback. The U.K. government has opened an inquiry into the breach.