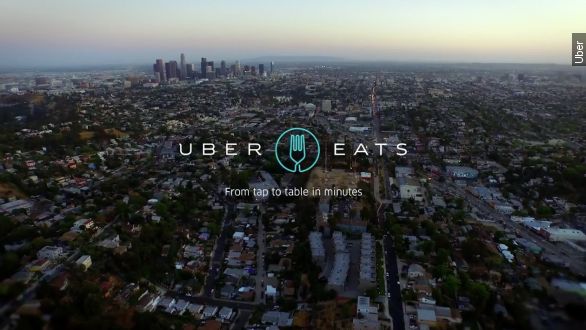 SMS
Uber Offers NYC Food Delivery Service In 10 Minutes Or Less
By Jamal Andress
By Jamal Andress
April 28, 2015
UberFresh was the original name for Uber's delivery service, and it's been in operation since August 2014 in places like Los Angeles and Barcelona.
SHOW TRANSCRIPT

As if there weren't enough food delivery services in New York City, ride-hailing service Uber is moving in on GrubHub, Seamless and Instacart's territory with food delivery in the Big Apple.

"UberEats: from tap to table in minutes."

Ten minutes, to be exact — at least that's what Uber is promising. In a city with 8.4 million people and notoriously busy streets, Uber says it will get you your food in that amount of time or less.

Now before you discount Uber's claim, some caveats: For one, Uber has done this before — in the one American city where traffic is even worse, Los Angeles. UberFresh was the original name for Uber's delivery service, and it's been in operation since August 2014. (Video via KABC)

After starting in Santa Monica, Uber now also serves Beverly Hills, Westside LA and some parts of Hollywood. And, you guessed it, that 10-minutes-or-less promise is still on the table.

"UberEats is just like UberX, but instead of picking people up, we deliver their lunch or dinner," an Uber driver said in the UberEats promotional video.

What's the secret recipe behind UberEats? How about a limited menu? Couple that with the fact that drivers already have the food on-board and we're suddenly looking at some pretty efficient meals on wheels.

Wired says this select menu is what allows Uber to keep its 10-minute guarantee in such large cities: "Rather than waiting for customers to place an order, waiting for the restaurant to make the order, and then battling traffic to deliver the order ... Uber drivers pick up batches of orders. ... Then they drive around as they always do, waiting to make a delivery."

Also, Uber's bite out of the Big Apple is a relatively small one. Instead of taking on the whole city at once, it will start by only serving the Manhattan area between 40th and 14th streets.

Along with constantly expanding its psuedotaxi service, Uber has consistently pursued businesses outside its core service. In just the past two years, the San Francisco-based company has launched a food-delivery business, convenience store on wheels, bike messenger delivery service, and last but not least a human-size breathalyzer.