Uber Is Way More Than Just A Taxi Service 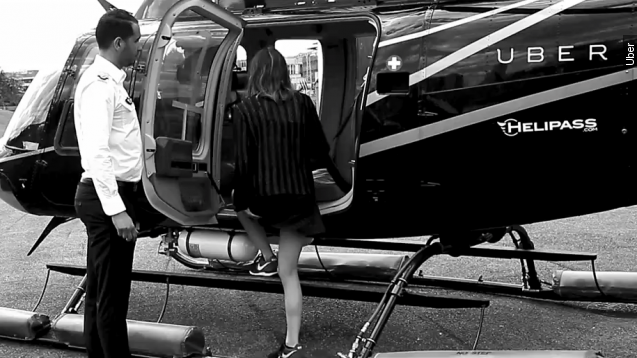 SMS
Uber Is Way More Than Just A Taxi Service
By Jamal Andress
By Jamal Andress
May 13, 2015
For a long time, Uber was known as a cheap taxi service with a tendency for controversy, but it's been recently rapidly expanding its services.
SHOW TRANSCRIPT

A Fortune Magazine reporter asked Uber's CEO, "It got me to thinking, is Uber more than cars? Can it be?"

"The way we look at what Uber is: ... Give me what I want, and give it to me right now and the logistics of how to get it to you," Travis Kalanick responded.

Uber has drivers all over the world, and it seems more and more Uber CEO Travis Kalanick is taking advantage of his international mobile fleet.

Most recently, to take you and three of your friends around France. In its latest venture, Uber has partnered with a helicopter company to offer UberCopter in France from now until May 24 — just in time for the Cannes Film Festival.

It'll cost patrons about $180 per person per ride, but the trip includes a private driver to take you from your location in downtown Nice to the helipad, a helicopter ride to Cannes and another private driver to take you to your exact location in the city. Uber also offers those services in the reverse for another $180. That price tag is a big change from the $9,000 Uber charged last year for its private jet service to the festival.

The company is offering similar heli-services in Honolulu, Hawaii, as well.

For a long time, Uber was known as a cheaper taxi service with a knack for controversy. But to call Kalanick's company just another way to get around would be selling the expanding service short. Or in other words, yes, Uber is more than just cars.

"UberEats is like a game-changer for us. Now people can get our food in 10 minutes," a client said in a promotion for UberEats.

Just last month, Uber launched its UberEats service, which plunges the ride-hailing app into the crowded delivery service market dominated by companies like GrubHub. UberEats promises food delivery from a limited menu in the most crowded cities in America.

As it stands, the UberEats service has launched in Los Angeles, New York City, Chicago and Barcelona, Spain, and they're all promising to deliver in 10 minutes or less.

Adding to Uber's delivery repertoire is UberRush, a bike delivery service also in NYC that will deliver everything from a Mother's Day card to a new pair of shoes from one part of Midtown to the other.

And while the San Francisco-based company is trying all these different services, it continues to expand across the world, now serving 57 countries and more than 150 U.S. cities.

Now, it's hard to say how Uber will fare in the delivery space. UberEssentials, the on-demand convenience store originally known as The Cornerstore, has ended its run in Washington, D.C., and that might be because the on-demand delivery service just wasn't catching on.

But it is safe to assume two things. One: The company doesn't plan on relying strictly on its ride-hailing service. And two: Investors can't get enough. Uber's latest valuation puts it at more than $50 billion.