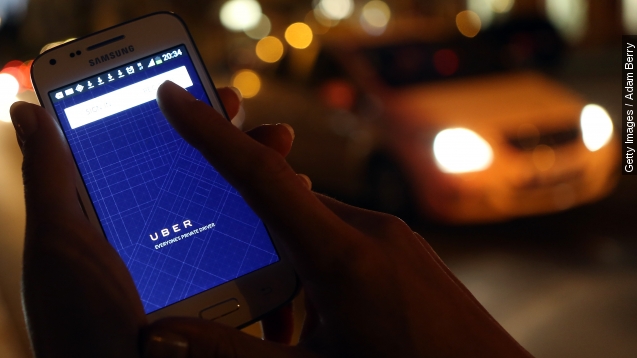 SMS
Uber Headed To LAX Despite Protests, Fine Threats
By Eugene Daniels
By Eugene Daniels
July 16, 2015
An airport board has voted to allow ride-hailing companies, like Uber, to pick up passengers at LAX — and not everyone is happy about it.
SHOW TRANSCRIPT

After taking a couple of KOs, Uber can finally put one in the "win" column. LAX officials announced Thursday ride-hailing companies can begin picking up passengers at the airport. But not everyone is happy about it. (Video via Uber)

Dozens of taxi drivers showed up in opposition to the meeting, saying the move would be bad news for them. (Video via KCBS)

"If Uber takes over the airport, we're going to be out of business," one person told the Board of Airport Commissioners in a public meeting. (Video via KNBC)

But those in favor of the new operations say consumer rights are the most important thing at play here. (Video via Uber)

"They have a right to choose who they would like to pick them up," a Lyft driver said. (Video via KTLA)

The fear that Uber will push taxis out at LAX may be warranted. According to an article in USA Today, Uber has topped taxis as a preferred transportation for business travelers in the second quarter of this year.

The article cites a study done by Certify that reported 31 percent of travelers used Uber compared to 24 percent of people using taxis. (Video via Uber)

But it seems the more popular Uber gets, the more controversy the company runs into.

The votes come just one day after a judge recommended Uber be banned from California and fined $7.3 million for violating state law.

According to the Los Angeles Times, the judge wants Uber to release rider information including the number of requests for people with wheelchairs and service animals. It's something Uber claims is a privacy risk for both drivers and riders. (Video via Uber)

The Los Angeles Times says if the new operations are certified by the city attorney, you can get an Uber at LAX starting in August.