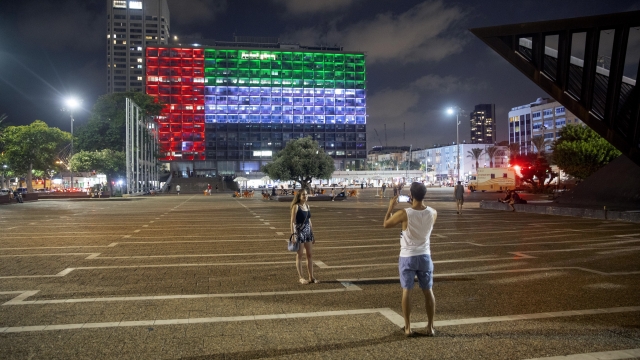 SMS
UAE And Israel Establish Diplomatic Ties In U.S.-Brokered Deal
By Nathan Byrne
By Nathan Byrne
August 13, 2020
Israel agreed to suspend annexation plans in the West Bank as part of the deal with United Arab Emirates brokered by the U.S.
SHOW TRANSCRIPT

In a landmark decision, Israel is suspending plans to annex parts of the West Bank as part of a deal to normalize relations with the United Arab Emirates.

The UAE is only the third Arab country to establish active diplomatic ties with Israel. But Palestinians have repeatedly warned Arab governments against committing to such a move until a peace deal is reached and an independent Palestinian state is recognized.

Israeli Prime Minister Benjamin Netanyahu echoed President Trump's remarks, saying, "Today we usher in a new era of peace between Israel and the Arab world. There is a good chance we will soon see more Arab countries joining this expanding circle of peace.”

Emirati officials said they had dealt a “death blow” to Israel's aggressive move to annex property in the West Bank and hoped to help reshape the region. Netanyahu said annexation plans were on a "temporary hold."