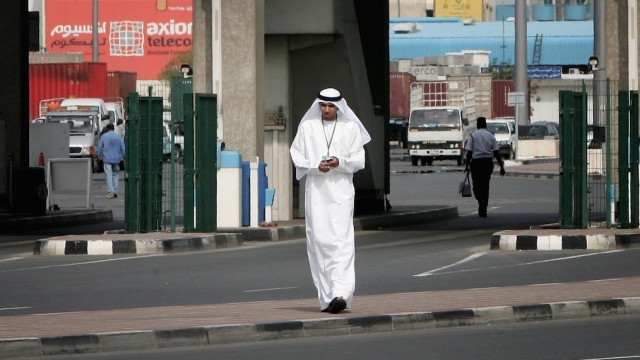 SMS
UAE Advises Citizens To Avoid Traditional Dress After Incident In Ohio
By Katie Link
By Katie Link
July 3, 2016
Officers approached an Emirati man with guns drawn, forced him to the ground and handcuffed him.
SHOW TRANSCRIPT

Officials in the United Arab Emirates are urging citizens to avoid wearing their traditional dress outside the region to "preserve their safety."

The warning comes after an Emirati man, wearing traditional robes and traveling in the U.S., was detained at a hotel in Ohio.

According to Newsy's partners at WEWS, the Avon Police Department responded to the call of a man in a hotel lobby "in full head dress with multiple disposable phones pledging his allegiance to ISIS."

The entire incident was recorded on police body cameras. You can see officers approach the man with guns drawn before forcing him to the ground and handcuffing him. Officers later determined the call was a false alarm.

The man told a UAE newspaper, "They were brutal to me. They pressed forcefully on my back. I had several injuries and bled from the forceful nature of their arrest."

The Avon Police Department and the town's mayor have since apologized to the man and called the incident "very regrettable."

The incident triggered the UAE government to act. In addition to the warning about traditional dress, the UAE Ministry of Foreign Affairs and International Cooperation published updated travel guidelines.

It urges people to "take caution while abroad due to the security developments in some European countries, triggered by the unfolding unrest in the Middle East region, and their fallout, especially the refugee crisis."