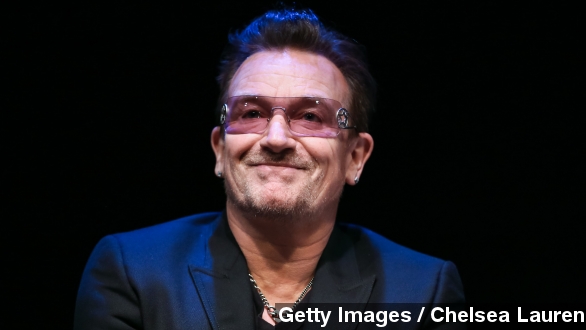 By Katherine Biek
January 2, 2015
After a serious bicycle accident back in November, Bono now says he may never be able to play guitar again. How will this affect U2?
SHOW TRANSCRIPT

U2 frontman Bono believes there's a chance he may never pick up a guitar again after a bicycle accident back in November.

The Irish rocker wrote in a blog post published on the band's website: "It is not clear that I will ever play guitar again. The band [has] reminded me that neither they nor Western civilization are depending on this."

At least he seems to have a sense of humor about the whole thing.

Bono's cycling spill occurred after he attempted to avoid crashing into another rider in New York's Central Park.

His injuries were extensive. Bono's doctor told Rolling Stone the 54-year-old broke bones in his face, shoulder blade and left hand. He also underwent a five-hour surgery to repair a broken arm bone with 18 screws and three metal plates.

Bono described the accident, writing, "I blanked out on impact and have no memory of how I ended up in New York Presbyterian with my humerus bone sticking through my leather jacket. Very punk rock as injuries go."

The singer also mentioned he's been busy working to get physically fit enough to join his fellow bandmates on tour in May.

Though Bono not being physically able to play guitar, at least for a while, probably wouldn't impact U2 that much. (Video Via Island Records / U2)

It's understandable, though, why Bono wants to be in fighting shape come May.

One big reason — we already know he's the band's frontman, but this will also be the first time U2 has gone on a worldwide tour since 2011.

Busy focusing on getting healthy, Bono wrote he's canceled all his public appearances up until the tour. To read his entire blog post, in which he also talks about his family and the iTunes release of the band's newest album, head on over to U2's website.