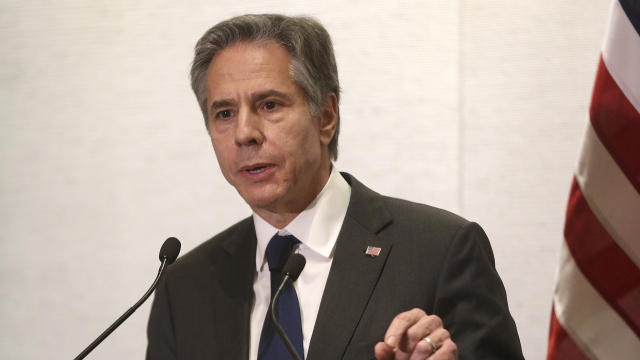 SMS
U.S. Won't Sanction Russia Before An Attack, Officials Say
By Maura Sirianni
By Maura Sirianni
February 20, 2022
Secretary of State Blinken is scheduled to meet later this week with Russia’s foreign minister in what would be another round of diplomatic talks.

Meanwhile, U.S. officials maintain there could still be a chance for diplomacy to avert a war.

Ukrainian President Volodymyr Zelenskyy asked the U.S., and other allies, to impose sanctions against Russia now before an invasion occurs. Zelenskyy said he fears sanctions imposed afterwards would not be as effective.

Sunday, U.S. Secretary of State Antony Blinken responded to Zelenskyy, stating that the U.S. did not want to unveil the sanctions ahead of time for fear it would "allow Russia to plan against them."

"Until the tanks are actually moving, the planes are actually flying, the bombs are actually dropping, we're going to do everything we can with diplomacy and deterrence and dissuasion to get President Putin to reverse the decision we believe he's made," Blinken said.

Zelenskyy also requested a timeline for when Ukraine might be able to join NATO.

"We have not set any timeline for that," NATO Secretary General Jens Stoltenberg responded. "NATO allies have been very clear that it is for Ukraine and 30 NATO allies to decide on membership and not Russia."

Friday, U.S. President Joe Biden warned that war may be only a few days away.

"We have reason to believe the Russian forces are planning and intend to attack Ukraine in the coming week, the coming days," said President Biden.

Blinken also said he's concerned that the extension of Russian military forces in Belarus is just another sign that Russia is setting the stage to invade, along with "false-flag" operations and the accumulation of more than 150,000 Russian forces along Ukraine's border.

"Everything we're seeing suggests that this is dead serious and that we are on the brink of an invasion. We will do everything we can to try and prevent it," Blinken said Sunday.

Blinken is scheduled to meet later this week with Russia’s Foreign Minister, in what would be another round of diplomatic talks.