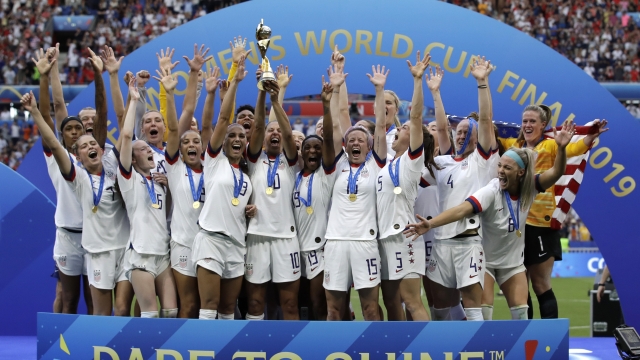 SMS
U.S. Women's, Men's National Soccer Will Get Equal Pay After New Deal
By Meg Hilling
By Meg Hilling
May 18, 2022
The agreement follows complaints from the women's team that they were paid less for a "superior performance."
SHOW TRANSCRIPT

It’s a shakeup never before seen in the world of soccer.

"This deal is going to have ramifications throughout the entire world," said Cindy Parlow Cone, U.S. soccer president.

Players on the U.S. women’s and men’s national teams will now be paid equally after reaching landmark collective bargaining agreements with the U.S. Soccer Federation Wednesday.

The agreements follow a $24 million settlement between players on the women’s team and the U.S. Soccer Federation over a 2019 gender discrimination lawsuit filed by some of the players.

“With the equalization of prize money for men's and women's World Cup, it's going to be a historic moment, and hopefully it will create change throughout the world," Cone said.

The U.S. Soccer Federation also notes that players on both teams will be provided 401(k) plans, and child care benefits will be extended to include the men’s team during national team training camps and matches.

"It's a game-changing moment here in the U.S., but it has the potential to change how international soccer and international sport do business," Cone said.

In a statement, the president of the men's players association, Walker Zimmerman, said, "They said equal pay for men and women was not possible, but that did not stop us and we went ahead and achieved it."

The president of the women’s players association, Becky Sauerbrunn, said "We hope that this agreement and its historic achievements in not only providing for equal pay but also in improving the training and playing environment for national team players will similarly serve as the foundation for continued growth of women’s soccer both in the United States and abroad."

The agreement follows complaints from the women’s team, which has won four World Cup titles since 1991, that players were paid less money even though, as they put it in a lawsuit, ”Their performance has been superior to that of the male players.”

News of these agreements comes just six months ahead of the upcoming men’s World Cup, which will begin Nov. 21 in Qatar.