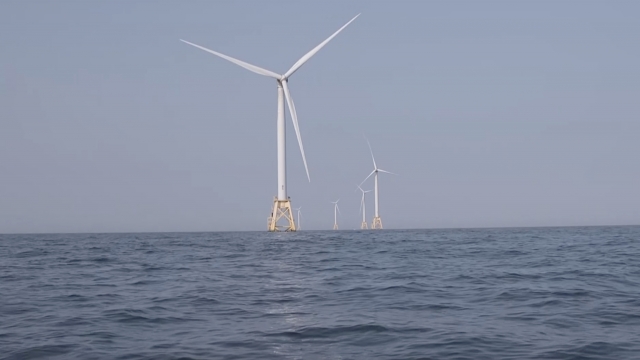 In the choppy swells off the coast of Rhode Island, an attempt at an Earth-saving revolution is staring down one of its biggest tests yet.

Five massive turbines stand to prove what skeptics and oil lobbyists have long tried to dismiss — that America can run on wind.

But like a tiny boat in the ocean, the U.S. is massively outperformed. And like the waves splitting against this hull, the path forward won't be smooth. It could knock the country right off course. One of the biggest being that the technology on display on the island won't be enough to sustain the country.

Block Island Wind Farm is the first offshore wind farm in the U.S and a key stepping stone toward a clean future.

"If you look at those blades, it's almost alien. It's just something really beautiful about them," says fisherman Steve Miller.

Block Island is the first of what will soon become dozens. The country's offshore wind plans are huge.

In 2020, a second wind farm came online off Virginia. Some 30 are in the works around the country, and the scale of development is only expected to grow.

Newsy's partners at Climate Central gathered data from Net Zero America, which projected the country's clean energy capacity and its ability to reach net-zero emissions by 2050 — the current U.S. goal.

That would require the country's offshore wind-generating capacity to climb rapidly in the years to come.

The U.S. currently only has about 40 megawatts of offshore wind generation — about enough to power 21,000 homes. But by 2025, Climate Central and Net Zero America project the U.S. could see an increase to more than 1,400 megawatts — a more than 30-fold increase.

By the time we hit 2050, Net Zero America projects the U.S. could have enough offshore wind capacity to power 102 million U.S. households — by today's energy usage. That's nearly all of America.

But the math won't hold 30 years from now.

But Net Zero America's projections are optimistic. They include plans to build wind farms where they currently can't go.

"If you're 3 nautical miles off the coast of Maine, you're in about 300 feet of water," Dagher says. "So you can't fix the turbine to the seabed because it's way too deep. It's too costly to do that."

That is where Dagher is positioned to literally change the global landscape. He patented a technology that will let massive, energy-generating wind turbines float in the ocean.

In 2013, he and his team deployed a 1:8 scale model in Penobscot Bay for testing. In intense conditions, it proved its grit — and that was just the model.

With a blade sticking up skyward, the real thing will be taller than the Washington Monument.

"We need facilities to be able to build it at large scale," Dagher says. "Europe has invested heavily in its port facilities and infrastructure in order for it to build its industry. We need to do the same thing."

"The industry accelerated in terms of blade size a lot quicker than we ever expected 10 years ago," he says. "It's not a bad thing. It's just we need to react."

The U.S. has, so far, been slow to react to offshore wind energy potential. While we have dozens of offshore wind projects on the line or in the works, countries in Europe have thousands. Block Island might know why.

The wind farm's namesake is a New England paradise of winding roads and rolling hills and an escape for tourists from all over the Northeast. To see the turbines, it requires a trip to a cliffside beach on the southeast shore. They look small from afar, but the island runs on their power.

It's poetic in a way that standing on the gorgeous rocky beach and looking out, you're looking at the thing that could be the solution to save the beach you're standing on.  And if it's done right, it could save the rest of the world, too. So why is it so hard to make it happen?

Sven Risom runs North Light Yarn on the island. He is the sole exporter here and a manufacturer running completely on wind power.

The island used to run on diesel generators, guzzlers that burned over a million gallons of fuel every year. But convincing Block Islanders to abandon them wasn't easy.

"If you have a house that looks over the bluffs, you're not used to seeing five big structures out there," Risom says. "And it was a fascinating discussion. People talked about land value degradation. They talked about declines of use. They talked about the end of the island. The Armageddon was close. And lo and behold — after the turbines have been up now a couple of years — tourism's up. There's been no land value loss. There have been no issues."

It's hard to draw solid conclusions about tourism on Block Island. Data is incomplete and sometimes unreliable.

The state relies on data from tourism economics. Their reports show a slight drop in visitor spending on the island immediately after the farm went online, before recovering and climbing slightly in the last few years. Block Island is proving what researchers hoped: that a community, even one so reliant on its views of the sea, can thrive on wind energy.

But it could be an uphill battle for the rest of the country. The U.S. doesn't have the facilities to build and launch the turbines, nor the workers to operate them.

Megan Amsler has thought a lot about that. She works with Massachusetts Maritime Academy, which is the first place in the country where students can get a complete safety training required under the International Standard for Offshore Wind Workers.

"The folks that we have had come through the training so far are primarily the members of the Pile Drivers Union," Amsler says.

Trainees learn from instructors keen on staffing an industry that will soon be hungry for workers.

The data from Climate Central and Net Zero America shows that in just a few years, wind will account for more than 285,000 jobs in the U.S. By 2030, nearly half a million. It grows rapidly before their projection tops out at more than a million in 2050. A massive pool of jobs for workers leaving fossil fuel.

But with close to half a million electric cars selling in the U.S. so far this year, battery-powered trains and even electric planes on the horizon — and with Europe far outpacing the U.S. — it's a question of whether the country has what it takes to catch up.

"It's a good question," says Dr. Habib Dagher. "You know, in many ways, the development of offshore wind, if we could offshore in the U.S., has been driven mostly by the states. We have lacked a national plan. It's like an orchestra playing without a conductor."

Even though the orchestra members, their audience and the very concert hall in which they play depends on finding their rhythm. But if these turbines are the starting point, the country already has its metronome. The challenge is getting everyone else to play along.