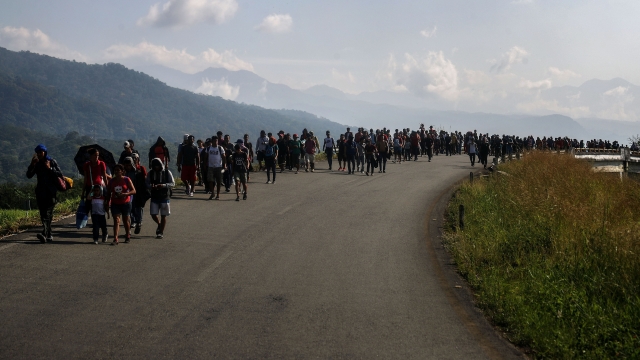 SMS
U.S. Will Reportedly Soon Send Asylum-Seekers To Honduras
By Katherine Biek
By Katherine Biek
December 17, 2019
This is all part of a deal the U.S. brokered with Honduras back in September that reportedly goes into effect early next year.
SHOW TRANSCRIPT

Central American migrants who seek asylum in the U.S. could soon risk being deported to Honduras.

That's because an asylum deal the U.S. brokered with Honduras back in September is reportedly set to go into effect early next year.

The deal will require migrants journeying through Honduras on their way to the U.S. to stop and apply for asylum in Honduras, instead.

The White House has signed similar "safe third country" agreements with El Salvador and Guatemala, the latter of which has already gone into effect.

But the Honduras agreement is reportedly the first to include a caveat that would block asylum-seekers from applying in the U.S. if Honduras or another country rejects their claims.

Critics say the agreement with Honduras will put migrants in danger. Honduras has the fifth-highest homicide rate in the world. The U.S. State Department warns Americans to reconsider traveling to the Central American country because there's so much violent crime.