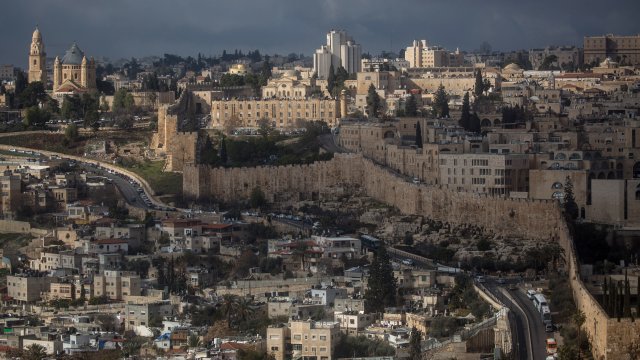 SMS
U.S. Will No Longer Consider Israeli Settlements Illegal
By Gage Jackson
By Gage Jackson
November 18, 2019
The U.S. reversed its position on Israeli settlements in the West Bank, and that could set back Palestinian efforts to achieve statehood.
SHOW TRANSCRIPT

Secretary of State Mike Pompeo announced Monday that the U.S. will no longer view Israeli settlements in the West Bank as "inconsistent with international law."

"The Trump administration is reversing the Obama administration's approach towards Israeli settlements. ... After carefully studying all sides of the legal debate, this administration agrees with President Reagan. The establishment of Israeli civilian settlements in the West Bank is not, per se, inconsistent with international law."

This is an important shift because it reverses a legal position the U.S. State Department has held since 1978, when the Carter administration determined the settlements broke international law.

The international community overwhelmingly considers these settlements illegal based on the Fourth Geneva Convention, which bans an occupying power from moving parts of its civilian population to occupied territory.

Israeli leaders unsurprisingly welcomed the decision, while Palestinians are bound to be upset. The move won't really impact U.S. policy in practice, but it could hinder an Israeli-Palestinian peace deal and set back Palestinian efforts to achieve statehood.

Shortly after Pompeo's announcement, the U.S. Embassy in Jerusalem issued an advisory for Americans planning to travel to the West Bank, Jerusalem or Gaza.