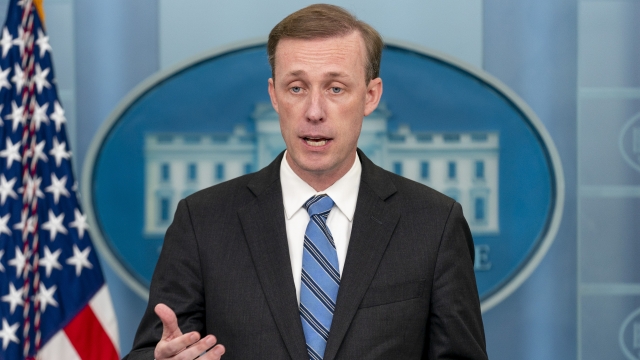 National Security Adviser Jake Sullivan insisted Sunday that Moscow's threats are just the latest indication that Russia is struggling in its war.

"We have communicated directly, privately, at very high levels to the Kremlin, that any use of nuclear weapons will be met with catastrophic consequences for Russia; that the United States in our allies will respond decisively. And we have been clear and specific about what that will entail," Sullivan said.

The warning comes as Russia launched illegal referendum votes over the weekend — aimed at annexing Russian-occupied parts of Ukraine — and after Russia's President Vladimir Putin made thinly veiled nuclear threats in a speech last week.

Russia accused the West of aiming to “destroy and fracture Russia."

It's not the first time Moscow has sought to flex its nuclear arm. But on Sunday, Ukrainian President Volodymyr Zelenskyy said this time, he's not sure President Putin is bluffing.

"He wants to scare the whole world. These are the first steps of his nuclear blackmail. I don't think he's bluffing. I think the world is deterring it and containing this threat," said Zelenskyy.

But Sullivan insisted Sunday that Moscow's threats are just the latest indication that Russia is struggling in its war.

"What you see inside Russia right now, this call up of troops, these sham referenda that they're trying to run in the occupied territories, these are definitely not signs of strength or confidence. Quite the opposite. They're signs that Russia and Putin are struggling badly," said Sullivan.

He also pledged that Russia's latest threats will not deter the U.S. and Western allies from continuing to support Ukraine. U.S. has provided about $15 billion in military aid to Ukraine.