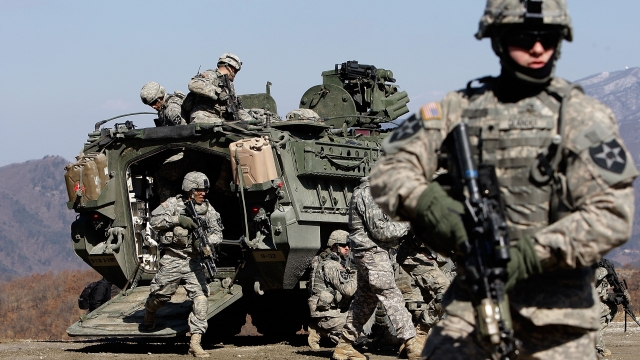 The Trump administration reportedly wants South Korea to pay a whole lot more to keep U.S. troops on its soil.

Thanks to a cost-sharing deal the two countries signed in March, South Korea is paying about $924 million this year for those American military personnel.

But multiple outlets report the U.S. now wants South Korea to increase its contribution by roughly 500% to $4.7 billion for 2020.

As of Friday morning, the Trump administration hasn't confirmed it made the request. But Defense Secretary Mark Esper told reporters that South Korea is perfectly capable of shouldering more of the cost.

"This is a very strong alliance we have. But Korea is a wealthy country and could and should pay more to offset the cost of defense," Esper said Friday.

There are about 28,500 U.S. troops in South Korea, and their prime mission is deterring aggression and stepping up to protect the U.S. ally, if necessary.

The U.S. and South Korea's current deal expires at the end of December. South Korea's defense minister did not explicitly comment on any negotiations, but he did say his country is ready to "set [its] expenditure at a reasonable level going forward."