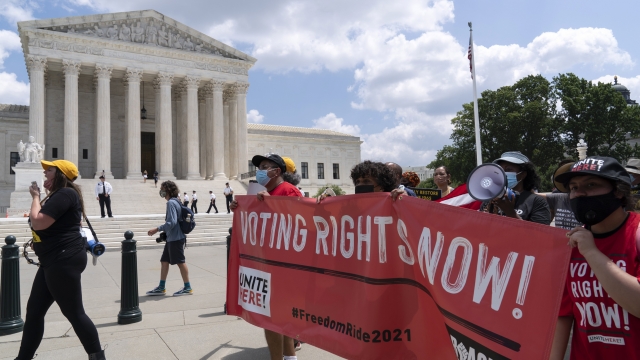 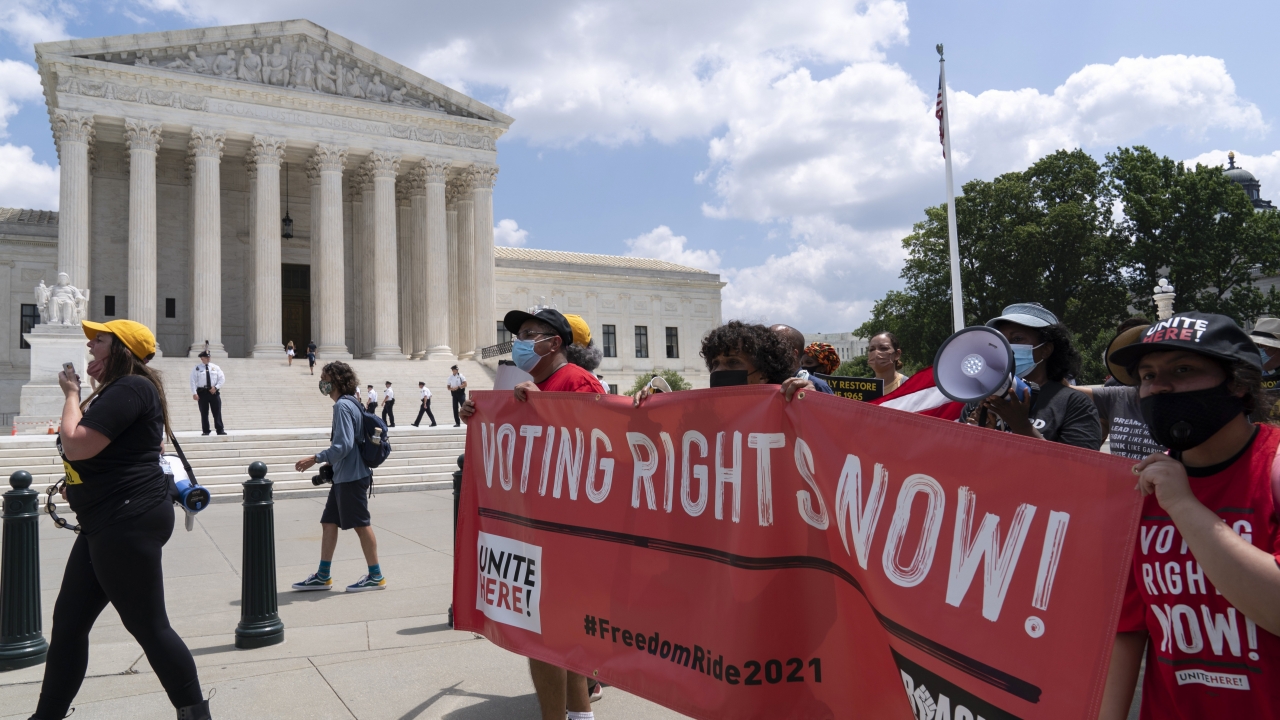 A decades-old fight to expand and protect voting rights will intensify this weekend, when multiracial coalitions of civil, human and labor rights leaders hold rallies in Washington and across the nation to urge passage of federal voter protections eroded since the Voting Rights Act of 1965.

It's a united front that rights advocates say hasn't been seen in two generations, back when the landmark federal legislation removed barriers keeping voters of color from easily accessing the ballot box.

Some progress was made this week, when the Democrat-controlled House of Representatives passed legislation Tuesday that would restore sections of historic voting legislation that allowed legal challenges to state voting laws. The Voting Rights Act also required states with a history of voter discrimination to get federal preclearance before changing laws.

True victory now hinges on the Senate, where Republicans have promised to block voting rights legislation and where Democrats don't have enough votes to overcome a filibuster rule that requires some GOP support for passage. And with midterm elections approaching next year, some fear the window of opportunity is closing to do away with the filibuster and beat back state-level voter suppression.

"I think this has given us a sense of urgency," said the Rev. Al Sharpton, whose "March On for Voting Rights" event with the families of Martin Luther King Jr. and the late Rep. John Lewis on Saturday will move from Washington’s McPherson Square to the National Mall, with the U.S. Capitol as a rally backdrop.

"The Senate is now the battleground," Sharpton said. "And clearly the timing of this couldn't be better. Everything that we're concerned about — whether it's health care, whether it's student loans, whether it's educational equality, whether it's economic relief — none of it can happen if our votes are lessened."

Sharpton's march and those in dozens of other cities, including Atlanta, Houston, Miami and Phoenix, cap a week of actions against a wave of proposals in conservative-leaning states to curb access to early voting, mail-in vote casting and ballot drop boxes used in pandemic-era elections.

Advocates say it's a reaction to shifting racial demographics, made clear in recently released 2020 census data, and a corresponding shift in the balance of power between the white majority and Black and Latino people, as well as rapidly growing Asian communities.

Prominent Republicans, who have criticized the Democratic proposals as a power grab, say they aren't opposed to election laws that expand voter access. And many of them support proposals to build trust among Americans who believe, albeit falsely, that the last presidential election was stolen from former President Donald Trump and other GOP candidates due to widespread voter fraud.

The Democratic proposals include the John Lewis Voter Advancement Act, which would restore and strengthen the weakened 1965 law and add protections against suppression tactics affecting Indigenous communities. The separate For the People Act would create a national standard for voter registration, mail-in balloting and early voting, as well as curb racial gerrymandering and institute campaign finance reforms.

Meanwhile, a wave of Republican-backed state initiatives could disproportionately disenfranchise voters of color at a time when they have turned out at the polls at historically high levels in states like Georgia and Missouri, said Carmen Perez, president and CEO of The Gathering for Justice, a nonprofit founded by legendary musician and activist Harry Belafonte.

"It's important that we create entry points for all people to get involved, especially when we’re looking at voting rights being taken away from Black and brown communities, as well as Indigenous communities," said Perez, an organizer of the "Make Good Trouble Rally" in tribute to Lewis at the Lincoln Memorial Saturday.

The late civil rights icon was brutally beaten by a state trooper during the 1965 march from Montgomery to Selma, Alabama, that preceded passage of the Voting Rights Act that year. Perez’s rally is in the same location as last year's commemorative March on Washington, where the families of George Floyd, Breonna Taylor and Jacob Blake urged support for federal policing reforms and voting rights legislation.

"One reason we do not have the George Floyd Justice in Policing Act passed at this moment is because of the lack of support ... on both the Democratic side and the Republican party," Mallory said.

"That means we have to elect new folks to office," she said. "And we have to have the ability to go to the polls and not be suppressed."

According to the Brennan Center for Justice, which tracks laws restricting voter access, between January and mid-July at least 18 states enacted 30 suppressive laws. More than 400 bills with rules that reduce mail-in voting access, ballot drop boxes and other restrictions were introduced in 49 states this year.

The bills followed the election of Joe Biden and Kamala Harris, the nation's first Black and South Asian vice president, along with a diverse group of progressive candidates to the House and Senate. On the same day as the Jan. 6 Capitol riot, Georgia declared the winners of its runoff elections — Democrats Raphael Warnock and Jon Ossoff, the state's first Black and Jewish senators.

An August poll by The Associated Press-NORC Center for Public Affairs Research found that 43 percent of Americans think the U.S. government is doing a good job protecting the right to vote, while nearly as many — 37 percent — say it’s doing a poor job. By comparison, in December of 2015, 70 percent said it was doing a good job compared with 15 percent who said a poor job. The drop came across party lines and across racial and ethnic groups.

An AP-NORC poll in April found about half of Americans supported expanding access to early and mail-in voting, while about 3 in 10 were opposed and the rest had no opinion. Automatic voter registration was the most popular Democratic proposal in the survey, endorsed by 60 percent of Americans.

The Biden administration, which said it supports the voting rights legislation passed by the House, hasn't made getting it through the Senate a priority, critics and advocates say. Many see the biggest Senate hurdle as two Democratic senators, Kyrsten Sinema of Arizona and Joe Manchin of West Virginia, who have said they oppose eliminating the filibuster to take up the voting rights legislation.

That's why the Rev. William Barber II, co-chair of the Poor People's Campaign, planned to confront Manchin with a mass motorcade from the Boone County Courthouse in Madison, West Virginia, to the statehouse in Charleston to call out the senator's obstruction on the filibuster.

"Democrats need to step up, because they ran on all this stuff," Barber said of the U.S. Senate. "Everybody said, if we get them the majority, they are going to do it. They're willing to pass infrastructure with 51 (Democratic) votes in the Senate. Why can’t they pass voting rights laws with 51 votes?"

The Senate is set to recess ahead of the Labor Day holiday next month, making the prospects of action on the legislation unclear.

"The urgency of the moment dictates that we act now," said NAACP President Derrick Johnson, whose civil rights organization has partnered with several national labor unions in support of federal voting rights legislation.

"In this moment, for the Senate to go home for recess without addressing the issue is a problem," Johnson said.