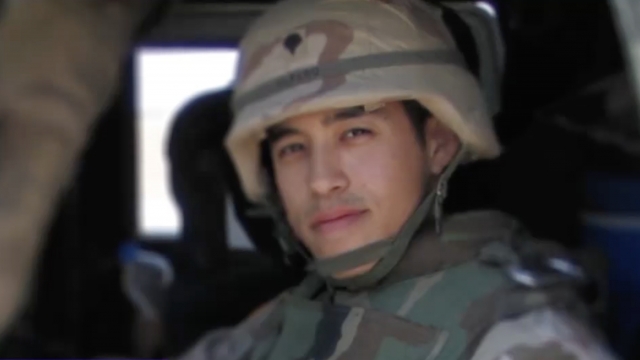 Former U.S. Army medic Sergio Alfaro returned from Iraq with the realities of war burned into his mind.

Sergio Alfaro is a 39-year-old veteran of the Iraq War. The former U.S. Army medic returned from Iraq with the realities of war burned into his mind.

Sergio's everyday life and relationships were impacted by the scars he could not erase.

In this piece, Alfaro talks about his journey from his darkest days to the moment of breakthrough when he realized — after years of therapy and help — that everything would be OK.

Research shows nearly half of American veterans who need mental health care don't get it.

There's faces that I'll never forget. It's something that I see time and time again in my head, regardless of whatever it is I'm doing. It feels like there's always a face that sits there in my mind, in the background, kind of looking at me, watching me.

This face is of an Iraqi policeman. He was somebody who was shot through the abdomen. He was just caught in between a firefight. In the wrong place at the wrong time. It's just unfortunate that he was injured by that 50-caliber bullet. This is no small bullet. He suffered an evisceration. Because of that, he died very painfully. He died shouting and screaming. And etched on his face was the absolute [worst] look of horror and terror and pain that I've ever had to see anybody have to live with.

It's not anything I'm ever going to be able to escape from. And it's the thing that I have to work towards being able to accept every day.

I remember when I left Iraq, it was a sense of disbelief that, you know, this wasn't real.

When I came back home, I remembered there was this feeling of, "I got a second lease on life."

I have to admit, it took me a while to realize that there was something wrong with me. And I didn't want to see it at first.

I was having nights where I would wake up screaming, you know, clutching at my bedsheets, or either drenched in sweat and thinking that we got hit by another mortar because I just heard the explosion and kind of straining my ears because of what I had practiced over and over and over and over again of, you know, "Am I OK? Is everyone else OK? Is anyone shouting 'medic'?" And trying to strain into the darkness and see and hear if anybody was actually calling out for me and if they were in need of help.

And I'd had these moments too, of disconnection — disconnection of myself, where I would enter into this kind of zombie mode and I would be a raging storm on the inside, full of emotion, of either anxiety or fear or of anger.

It just seemed never ending, like it was just something that was just flowing through me and filling up every nook and cranny of my being and was wanting to even sweep me away with it.

At that moment, I felt like I was crazy — that I was beyond hope, beyond saving.

And so when my wife told me, "Hey, I don't know how much longer I could do this." Well, I'll tell you what, my initial gut reaction was one of, "You're right." You know, this is the PTSD portion and cycling that I would get into. "See? Look what I do to her. Look at how much pain and suffering I bring into her life."

I think the hardest part for me was that I got used to sucking it up, trying to pull myself up by my bootstraps. And I'll tell you what, I pulled myself up so hard by those bootstraps, I pulled those damn straps off. But, if I could try to help you save yourself from a mistake that I made over and over and over again — sometimes the harder thing is getting the help that you need.

I couldn't do it on my own, I needed a lot of help. A lot of help. I think this is where Warrior Care Network, in conjunction with the Wounded Warrior Project, they helped me out so much. And I got help at Home Base and Road Home Program.

It was amazing. The therapist that they were able to pick out for us with the couples counselor that we were able to see, they helped us out so much. And that kind of started me on the journey of even more therapy in a different way.

That's where I was able to, I guess, really kind of make therapy my full-time job.

It's almost as if all these infected wounds inside of myself — the ones I couldn't necessarily open myself up and share and show to other people — they needed to be cleaned out. They required a lot of rigorous action on my part. A lot of pain and opening up and vulnerability and sharing those things.

There was a turning point that I was able to clearly recognize within myself that all of the work they had been doing was worth it. And it was one night when I was sitting down on the couch with my wife and our dog. They're asleep on top of me and I was able to look at them and take them in for who they were and what was right in front of me. There was a sense of peace and contentment. The anxiety didn't come in. The guilt didn't come in. That dead Iraqi policeman's face didn't even show up. And I was able to smile and be happy.

Before, it would trigger 100% of the time: guilt. I can't help but think that I wasn't deserving of that love, that it was better meant for someone else. But because of therapy, because of my acceptance of what it is that I live with, I'm able to take that in, to be able to drink from that cup and to kind of bask in that warmth. That's what makes this worth it. That's what makes all the heartache and the time, the trouble worth it.

How Has Our Approach To Treating PTSD Evolved?