U.S. Says It's 'Not Too Late' To Resume Nuclear Talks With North Korea 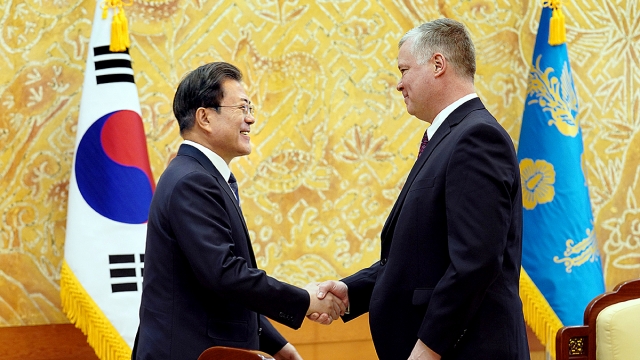 SMS
U.S. Says It's 'Not Too Late' To Resume Nuclear Talks With North Korea
By Caitlin Baldwin
By Caitlin Baldwin
December 16, 2019
North Korea set a year-end deadline for denuclearization talks, but the U.S. says it's happy to restart negotiations at any time.
SHOW TRANSCRIPT

The special envoy to North Korea says the U.S. is ready to head back to the negotiating table for denuclearization talks.

U.S. Special Envoy Stephen Biegun has been meeting with his South Korean counterparts in Seoul. He addressed North Korea during a joint press conference Monday, saying: "It is time for us to do our jobs. Let's get this done. We are here, and you know how to reach us."

Biegun also said the U.S. is dismissing the year-end cutoff North Korea set for negotiations. He said: "The United States does not have a deadline. We have a goal."

Earlier this month, North Korea said the U.S. would have to decide what "Christmas gift" it wanted from Pyongyang at the end of the year. It also accused President Donald Trump of stalling negotiations to further his own political agenda.

Negotiations broke down back in February when President Trump and North Korean leader Kim Jong-un were unable to reach a deal at their second nuclear summit. Pyongyang has since restarted ballistic missile tests.

Biegun said during Monday's press conference that the U.S. knows North Korea could conduct another missile test and that provocation on Pyongyang's part "will be most unhelpful in achieving lasting peace on the Korean Peninsula."