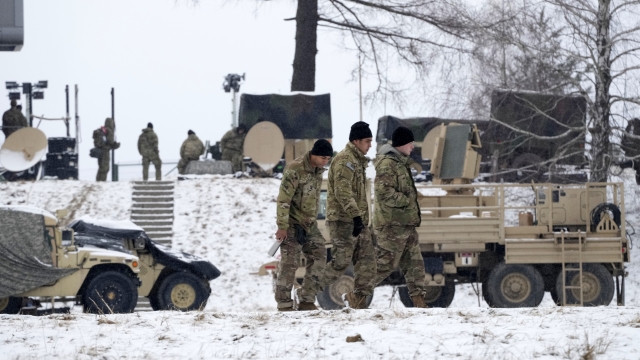 On Tuesday, a senior U.S. defense official reiterated that U.S. troops will not be fighting in Ukraine, and that includes in the use of a no-fly zone, saying there's no discussion about it.

But U.S. troops are still heavily deployed in Poland in a show of force for an important NATO ally.

U.S. troops with the 82nd Airborne Division arrived with a mobile radar unit, Humvees and other heavy equipment.

They are setting up camp just a few miles from the border with Ukraine in a frigid, sparsely-populated part of Poland.

President Biden has deployed 7,000 U.S. service members to NATO's eastern flank in recent weeks — most of them to Poland, adding to the 4,000 that were already stationed in the country. Last week, the president sent an additional 7,000 troops to Germany.

Others in the 82nd are engaging in joint training exercises with Polish forces around two hours north.

The goal of these drills, according to the Pentagon, is for the American and Poles to get to know each other's equipment, capabilities and tactics.

The paratroopers are there, the US. says, to help Americans evacuating Ukraine, but their foremost purpose is deterrence against Russian aggression towards a NATO ally.

The rising show of force goes beyond troops. The day after Russia's invasion of Ukraine, the U.S. transferred UH-60 Black Hawks and AH-64 Apache attack helicopters there from a base in Greece.

The Biden administration has been under increasing pressure to set up a no-fly zone over Ukraine but has so far refused, arguing that the risk of getting into a shooting war with Russia in the skies over Ukraine are simply too great.

For the same reason, there are no plans to send any of these troops into Ukraine.

But war is unpredictable, and should the orders change, the troops are ready.

A Pentagon officials says in the last 24 hours, there have been fewer than 70 American citizens who have moved from Ukraine into Poland. A handful of American service members provided them with food, water and internet access.