U.S. Troops Are Back In Iraq's Bloodiest Battleground 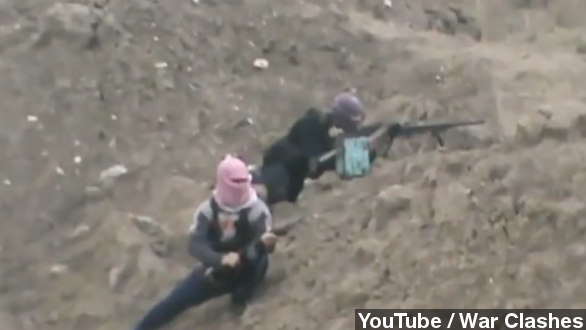 For the first time since 2011, U.S. troops have been sent to the combat zone that claimed the most American lives in the Iraq War.

This week, a team of about 50 U.S. military advisers arrived at Al-Asad Air Base in Iraq's Anbar province.

Anbar was a bloody battleground during the eight years U.S. troops were stationed there. The 2004 Battle for Fallujah — the biggest battle of the Iraq War — left more than 100 Americans dead. (Video via National Geographic)

In total, about a third of U.S. troops killed in Iraq died fighting in Anbar.

Eventually, with the help of the region's Sunni tribes, the U.S. coalition was able to drive out Iraq's Al-Qaeda affiliate. (Video via U.S. Department of Defense)

The victory was short-lived. When the U.S. left in 2011, Al-Qaeda in Iraq — the predecessor to ISIS — returned and resumed its attacks. (Video via YouTube / adri12345)

And that brings us to where we are today. While fighting in Mosul, Erbil and Kobani has gotten the most attention, Anbar shouldn't be overlooked, as it's key to the group's ambitions.

The area, northwest of Baghdad, is the country's only Sunni-dominated region. Many residents there — feeling alienated by Iraq's Shiite-led government — have joined up with Sunni militants of ISIS. (Video via YouTube / akram hadi)

ISIS now controls an estimated 80 percent of the province. Their offensive in recent weeks had prompted Anbar's government to call for the return of U.S. troops. (Video via YouTube / WarClashes)

Although U.S. airstrikes in the region did succeed in keeping ISIS from seizing Anbar's strategically important Haditha Dam, the militants are still advancing. (Video via U.S. Central Command)

Should Anbar province fall entirely to the militants, it could have disastrous consequences.

As one Iraqi security expert told The Washington Post last month, ISIS could then refocus its attention on Baghdad: "The government would lose the Haditha Dam, and the security forces would have to retreat. ... There would be a blood bath."

The U.S. troops now at the airbase in Anbar, although armed, are there in an advisory role only. President Obama recently announced he was doubling the number of U.S. troops in Iraq — sending 1,500 noncombat advisers in what he called a "new phase" of the operation.