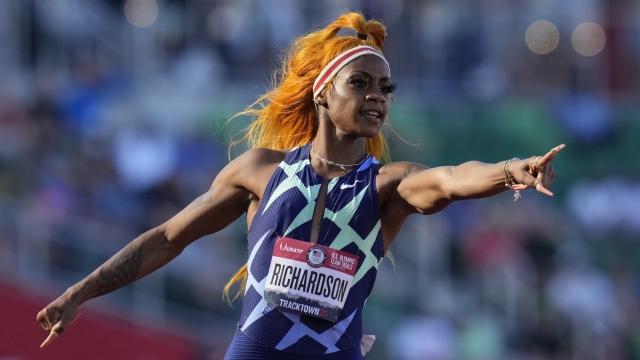 America's fastest woman, Sha'Carri Richardson, dominated the 100-meter race at the Olympic trials, attracting a new legion of fans. But in just two weeks her fast track to clinching gold has been dashed.

"I know what I did, I know what I'm supposed to do, ... and I still made that decision," Richardson said in an interview with "Today."

Richardson tested positive for marijuana, invalidating her Olympic trial win and disqualifying her from running the 100-meter race in Tokyo — her signature race.

The 21-year-old tweeted Thursday, “I am human,” and later revealed in an interview she’s coping with the death of her biological mother, which she learned about from a reporter during a recent interview.

“To put on a face, to have to go in front of the world and put on a face and hide my pain, I don't know, who are you or who am I to tell you how to cope,” Richardson told "Today."

The World Anti-Doping Agency says "all natural and synthetic cannabinoids are prohibited." This includes marijuana. The only exception is cannabidiol, or CBD, which does not contain the chemical THC.

Suspensions for a positive marijuana test can span from 30 days to two years. Richardson accepted a one-month suspension from the U.S. Anti-Doping Agency because she used the drug out of competition, didn't use it for sport performance and successfully completed a counseling program.

In a statement, the CEO of USADA calling the suspension "heartbreaking."

The track star might be able to compete in the Olympic 4 x 100-meter relay race, but the decision is up to USA Track & Field, the governing body of the sport.

That organization said in a statement, "Sha'Carri Richardson's situation is incredibly unfortunate and devastating for everyone involved."