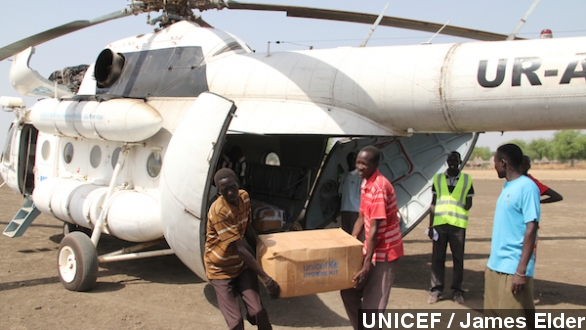 SMS
U.S. To Send $273M In Aid To South Sudan
By Kate Grumke
By Kate Grumke
February 10, 2015
The U.S. announced it will send $273 million to South Sudan as part of a U.N. push to combat hunger in the war-torn country.
SHOW TRANSCRIPT

The U.S. has announced it's sending almost $273 million in aid to South Sudan. (Video via United Nations)

The youngest nation in the world has been gripped by civil war since December 2013, when the country's president accused his vice president of trying to stage a coup.

Peace deal after peace deal has fallen through, with the latest broken ceasefire resulting in an attack on a key town in South Sudan's oil-producing region.

The violence has killed thousands and displaced more than 2 million people, with almost 500,000 refugees in neighboring countries.

The conflict has also pushed the country close to famine. Nearly 2.5 million people are facing acute hunger in South Sudan. The U.S. aid money will try to address that problem.

"We have to address what is becoming a nutritional catastrophe and it is now a nutritional disaster," said Anthony Lake, UNICEF Executive Director.

In one bright spot in the ongoing conflict, the U.N. has secured the release of 3,000 child soldiers. But a U.N. official said it will take a peaceful agreement between the two sides to truly find a solution.

"South Sudan as a country will slide more and more into a humanitarian crisis. We potentially could lose a generation of South Sudanese children," said Valerie Amos, UN Under-Secretary-General for Humanitarian Affairs.

The U.S. contribution represents a small part of what the U.N. is asking for. It will take the help of other countries to raise the $1.8 billion the U.N. says South Sudan needs. (video via Al Jazeera)