U.S. To Drastically Hike Citizenship And Most Other Immigration Fees 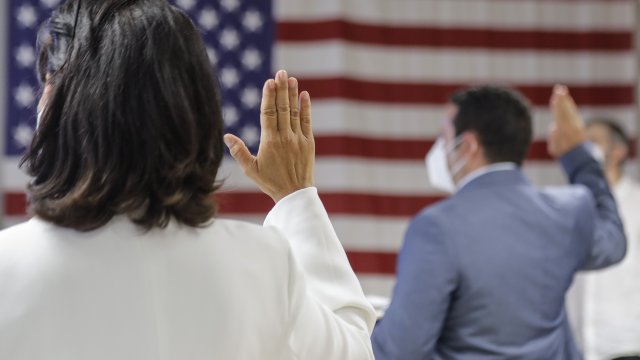 SMS
U.S. To Drastically Hike Citizenship And Most Other Immigration Fees
By Ben Schamisso
By Ben Schamisso
September 1, 2020
Advocates hope to reverse the Trump administration's plan in court, saying it is an unlawful attempt to price out poorer immigrants.
SHOW TRANSCRIPT

Eligible immigrants across the country are scrambling to file their citizenship applications before it gets a lot more expensive in the fall.

"I wanted to vote. I wanted to be heard. I wanted, you know, to matter," said Riva Castro, a long-time Filipino immigrant.

The Trump administration plans to soon increase the cost of most immigration petitions, some by more than 500%. But lawyers hope to reverse the move, which they call an unlawful attempt to price out poorer immigrants.

"I feel like, do they want us to be American citizens — going through a lot of hardship, you know?" Castro said.

She has been a permanent U.S. resident for decades. After saving for five years, she's now ready to apply for citizenship despite recently losing her job due to the pandemic.

If she doesn't send her 20-page-long application form by October 2, it will cost her hundreds of dollars. That day, the fee to apply for naturalization will nearly double from $640 to $1,170.

For green card applicants who want to work and travel while their cases are pending, the fee will surge by 85%.

The U.S. will also charge the first-ever fee to apply for asylum and will make it harder for most low-income applicants to get fee-waivers.

"Across the entire immigration system, individuals who don't have the ability to pay are just going to be shut out," said Melissa Rodgers, a director of programs at the Immigrant Legal Resource Center, one of the organizations suing the government over the planned fee hikes.

"This is about reshaping who's a citizen and who's a voter," said Rodgers.

USCIS is almost entirely funded by fees it collects from applicants. And federal law requires it to review its fees every two years and adjust them according to needs and costs.

But critics say the agency's cost-benefit analysis doesn't add up.

"The information we have doesn't back up the administration's claim that they really do need to increase fees," said Rodgers.

Rodgers' organization and the other plaintiffs are asking a federal judge to issue a preliminary injunction before the new fees kick in next month. Ben Schamisso, Newsy, Chicago.