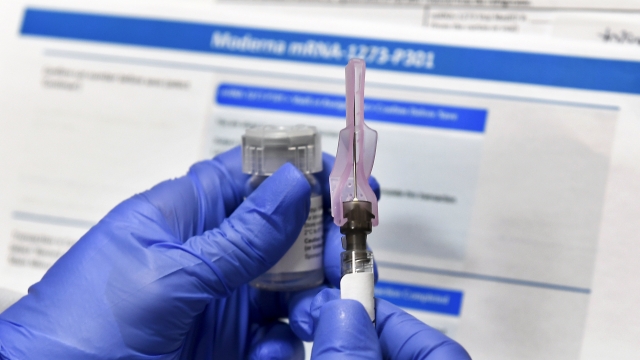 SMS
U.S. Agrees To Buy 100 Million Doses Of Another COVID-19 Vaccine
By Katherine Biek
By Katherine Biek
August 12, 2020
Moderna's vaccine, which was also developed by the National Institutes of Health, is currently in late-stage human trials.
SHOW TRANSCRIPT

The Trump administration has reached a deal with biotechnology company Moderna to purchase 100 million doses of its experimental coronavirus vaccine.

The vaccine, which was also developed by the National Institutes of Health, is currently in late-stage human trials.

Unlike most vaccines, which introduce a small amount of a virus into a patient's system, Moderna's vaccine carries genetic material called mRNA. That mRNA is supposed to trigger an immune response in the body.

The government's contract with Moderna is worth more than $1.5 billion. Aside from the initial 100 million doses, the deal also gives the Trump administration the ability to purchase as many as 400 million additional doses of the vaccine from Moderna.

Moderna is already manufacturing its vaccine. That way it can be rolled out quickly if it's approved.

The Trump administration has made similar deals with other pharmaceutical companies for their potential COVID-19 vaccines. It hopes to have a vaccine ready for the American public by the end of 2020.