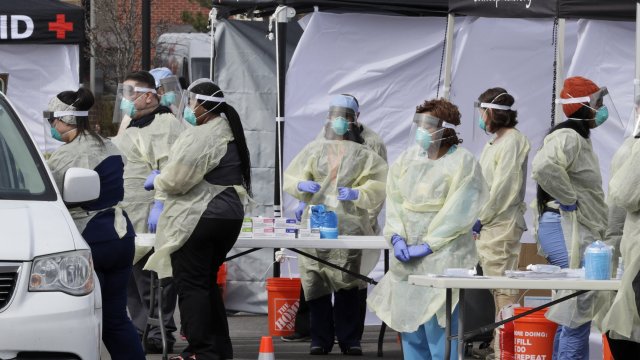 During the trade war with China, the U.S. slapped tariffs on around $4.4 billion worth of medical equipment.

The Trump administration's tariffs on China are making it more difficult for U.S. health care providers to stock up on crucial medical equipment.

During the U.S.-China trade war, the Trump administration placed tariffs on around $4.4 billion worth of medical gear, according to an analysis from the Peterson Institute. Protective gear for health care workers — masks, gloves and gowns — made up the bulk of those tariffed products.

After the pandemic started, the administration lifted some of those tariffs for certain companies importing that equipment. But those exemptions will expire later this year and don't cover all of the medical gear imported from China.

Tariffs aren't the only barrier keeping medical supplies from reaching the U.S. Global Trade Alert notes 24 different countries, including China, have either banned or restricted the export of medical supplies since January of this year.

President Trump told reporters, "We have a lot of people working very hard to do ventilators and other things."

President Trump is using the Defense Production Act to compel domestic industries to start making medical equipment. But that work might be hindered by the president's trade policy as well: Some of the raw materials needed to make those supplies will be tariffed goods from China.